How we’re building the autumn of anger

This article is over 10 years, 3 months old
Workers discuss what they're doing to prepare for mass strikes against the government
Downloading PDF. Please wait...
Tuesday 20 September 2011

We’re organising a public meeting of all the public sector unions in Islington. I’ve contacted the union reps and they’re all up for it.

We want to overcome the division that the government is trying to make between public and private sector workers.

We’re arranging workplace visiting. We need to get that tradition back. And hopefully we’ll end up with a network of people in the area that want to fight back.

There isn’t a moment to lose. Start by organising a meeting on pensions for people where you work—whether that is ward, a lab, or health centre.

It doesn’t matter if your meeting is only for a small number of staff, they key is to get the ball rolling.

Unison nationally is pushing for this kind of activity, so there is no reason to wait for approval.

Approach reps from other unions on your site and offer a joint meeting.

The feeling that all public sector workers are in the same boat means that people want to fight back together.

You can also let team leaders know about the meeting. Some may allow you to leaflet staff, use notice boards and, in some cases, they may even give people time to attend.

In the past few weeks I’ve organised six meetings of this kind and spoken to over 200 people.

Many of those attending have never been to a union meeting before.

You don’t need to be a pensions “specialist” or a union rep to be the speaker at pensions meetings, but you do need the basic facts—these are available on union websites and in the Socialist Worker pensions factsheet.

The increase in the pension age is the crucial issue in the health service. Most of us cannot envisage doing our jobs when we are 65—never mind 68­—but that is exactly what the Tories want.

Make sure you have an example of how much an average health worker stands to lose.

Be sure to make clear that our pensions are our money and our deferred wages, not a gift from the government.

And, make sure that there is something that people can do afterwards. That could include leafleting for the Manchester demonstration against the Tories.

By ensuring this basic preparation is repeated around the country, we will have gone a long way towards winning the ballot for industrial action.

The government has gift-wrapped the attack but they still want the same money from us. This money will go to the treasury and then into the banks.

We’re holding over 100 pension briefing meetings throughout the country. Our target is to have face to face briefings with over 1,000 reps.

Unions ballot millions to take on the Tory cuts 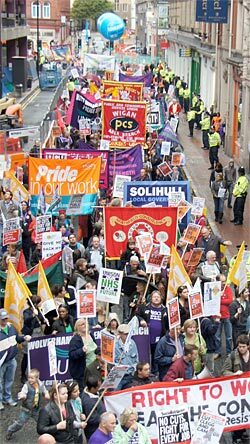 All out to beat the Tories