This article is over 9 years, 9 months old
The Tories plan to sack 600 firefighters and close 17 fire stations in London in a huge attack on the capital’s fire service.
By Tom Walker
Downloading PDF. Please wait...
Tuesday 23 October 2012

The Tories plan to sack 600 firefighters and close 17 fire stations in London in a huge attack on the capital’s fire service.

The plans, revealed in a leaked document, are part of Tory mayor Boris Johnson’s plan to cut £65 million from the fire service budget.

Paul Embery, regional secretary of the firefighters’ FBU union, said the cuts are “wrong and dangerous”.

He added, “Such a huge cut cannot be made without there being an impact on public safety, and we call on Londoners to join with us in defending our fire service.”

The plans are set to be voted on by a London Fire Authority meeting on 22 November. It is possible that the elected members of the fire authority will vote to reject the cuts—but Boris Johnson has the power to push them through anyway.

Johnson let slip at Tory party conference earlier this month that the attack was on the horizon. He said empty fire stations in London could be turned into free schools. “I want dozens of them across the capital,” he said. Yet there are no fire stations standing empty.

Now we learn that Johnson intends to change that. Firefighters and civilian fire brigade workers are already receiving letters telling them to take voluntary redundancy.

It appears many of the fire stations have been chosen for their potential value if they were sold off. Stations in areas like Clerkenwell, Islington, Kensington, Knightsbridge and Westminster would be worth many millions of pounds.

Yusuf Timms is a firefighter and FBU member at Kensington fire station—which is on the leaked list. “The scale of it is shocking,” he told Socialist Worker. “They’re going to put the city in danger to save what is a paltry sum of money in the scheme of things.”

“One fire engine can’t put out a fire unless it’s very small,” he said. “If it’s something bigger then what’s important is what’s called the ‘weight of attack’.

“If you’re going to actually put a fire out then you need to get three fire engines there in five minutes and throw everything you’ve got at it. That’s where these cuts will really hit.”

He added that the closures are likely to be connected to a new round of attacks on firefighters’ conditions of service.

“We should be having big meetings saying we’re not going to accept these cuts,” he said. “And we need to say that if we’re going to save these stations then we’ll need industrial action.”

The London cuts are part of a wave of attacks hitting fire services across Britain. In West Yorkshire 11 fire stations are set to close. That comes on top of ten that were shut last year. They are being replaced with half as many new stations.

This will mean a loss of one in five firefighters in the area over the last two years. The FBU has called a demonstration against the cuts in Leeds on Saturday 3 November. 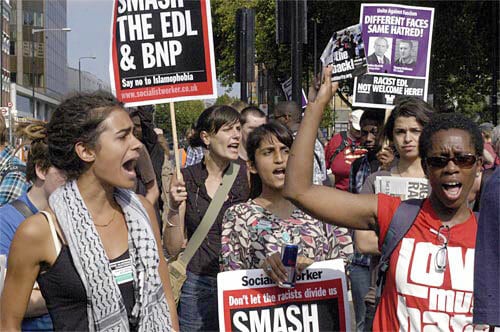 Police plan to let EDL march through heart of Walthamstow