This article is over 17 years, 2 months old
The scale of last Saturday’s Stop the War demonstration, which marked the second anniversary of the invasion of Iraq, far exceeded the expectations of many.
By Matthew Cookson and Kelly Hilditch
Downloading PDF. Please wait...
Saturday 26 March 2005

The scale of last Saturday’s Stop the War demonstration, which marked the second anniversary of the invasion of Iraq, far exceeded the expectations of many.

More than 150,000 protesters filled the streets of central London. At the head of the march, members of Military Families Against the War placed a coffin outside the US embassy and held a two minute silence to remember all those killed in the war.

The size of the protest reflected the growing opposition to the occupation of Iraq, the attacks on civil liberties and George Bush’s threats against Syria and Iran. It also showed the continued vibrancy and determination of the anti-war movement.

Salma Yaqoob, from the Birmingham Stop the War Coalition, told the rally in Trafalgar Square, “I stand here with confidence because we have built the biggest movement, which says that what unites us is more important than what divides us.

“The ‘war on terror’ is a war of terror. There is economic terrorism killing 30,000 children a day. Let’s continue our fight to make war and poverty history.”

Rose Gentle, of Military Families Against the War, who lost her son Gordon in the war, said, “My son was killed in Iraq on 28 June last year. Tony Blair killed my son and I am going to let him know it.

“Recruitment to the army has gone down because of our campaign. We have to get the troops out and get Blair out.”

George Solomou, who has resigned from the Territorial Army over Iraq, said, “I have a message for Blair. Spain and Ukraine and now Italy have marched, and their troops are coming home. Where are our troops? Bring them home.”

Tony Benn said, “This is a peace movement on a global scale — 99 percent of the people in the world support the aims of this movement. The war in Iraq was illegal. America and Britain broke international law.

“This was not only an illegal war, it was an immoral war, with 100,000 Iraqis dead, with Fallujah destroyed and with Iraqis tortured.

The general secretary of the CWU postal and telecoms union, Billy Hayes, said, “What a great day, after two years of an unjust war, to see so many people demonstrate.

“The government treated you, the British people, and the world like fools. But you refused to be fooled. Despite the election in Iraq the occupation will continue unless we oppose it.

Many people spoke about the need to demonstrate against George Bush, Tony Blair and the other leaders of the G8 countries when they meet in Gleneagles, Scotland, in July.

The chief executive of War on Want, Louise Richards, said, “There is only one just war and that is the war on want, the war on poverty — that’s the only war we’re fighting.

“Change comes from below. Around the world people are risking their jobs and their safety in the fight to make poverty history. We hope to see you in Scotland for the alternative summit.”

Lindsey German, the convenor of the Stop the War Coalition, said, “Bush has said that the Syrian troops need to leave Lebanon, that free and fair elections are not possible under foreign occupation. If that is right, then the US and British troops should get out of Iraq.

“Blair has said that Iraq is not an issue for this election. Why not? If he is proud of what he has done, why not campaign on the issue?

“In July the murderers of the world will gather in Scotland for the G8. I hope to see everyone at the Make Poverty History demo.”

Blow for ministers in Zimbabwe case 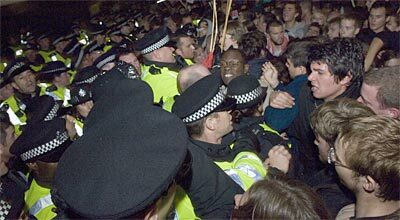