OVER 27,000 people joined Bernie Sanders’ campaign rally in New York last night, Wednesday. This is larger than the 24,000 who turned out for Barack Obama in 2007.

Sanders is battling establishment candidate Hillary Clinton in advance of the 19 April New York primary vote. This is the latest stage of the process to decide who is the Democratic Party candidate for US president.

Sanders, the self-described socialist, attacked Wall Street greed, denounced Clinton’s failure to call for a ban on fracking and said, “When we stand together—black and white and Latino and Asian American—when we do not allow the Donald Trumps of the world to divide us up, there is nothing we can’t accomplish”.

Martha Wilkinson-Jennings told Socialist Worker, “It was amazing, amazing—all that energy, all that positive feeling. We can’t go on with a society where only a few have so much and the rest have so little. It has got to change. I love what Bernie is saying because it’s so rare to stand up and tell it like it is.

“Before this campaign I didn’t think about myself as a socialist. But now I do. I want to find out more.” 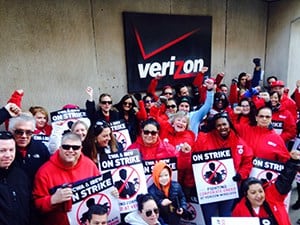 Almost 40,000 Verizon workers have just begun an indefinite strike in a fight against outsourcing, job losses, pension and healthcare cuts, and wage reductions.

The company also wants its workers to accept assignments away from their homes for up to two months at a time, and for Sunday to be an ordinary working day. The strikers are repair workers, installers, customer service workers and technicians.

This is a very high-profile battle which is another expression of the gathering angry mood in the US which also lifts Sanders.

Their CWA union says Verizon made £26 billion profit over the past three years, along with over £1 billion in profit each month for the first three months of 2016. 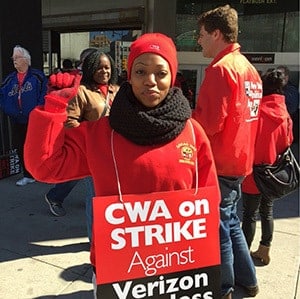 Tatiana is one of the Verizon retail workers striking for the first time (Pic: @TimDubnau)

The most recently released figures show the company’s top five executives grabbed around £30 million in 2014, including £12 million for top executive Lowell McAdam.

McAdam attacked Sanders’ comments supporting Verizon workers. Sanders replied that “I don’t want the support of the billionaire class. I welcome their contempt.”

Verizon bosses won’t give in easily. They have said they will use non-union workers to scab.

On strike day one, a vehicle going through a picket line in Maryland hit a striking worker although he was not thought to have been seriously injured.

In 1989, during a long strike against one of Verizon’s predecessor companies, striker Gerry Horgan was killed when a scab truck driver struck him on the picket line.

Clinton has also visited the Verizon strikers, although her reception was much more muted than the one for Sanders. The Verizon corporation paid Clinton $225,000 for a 40-minute speech in 2013. 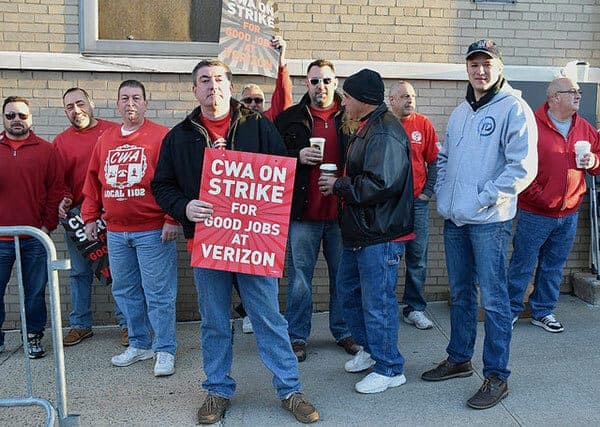