This article is over 10 years, 3 months old
The first genuine elections in over 40 years were held in Tunisia this week. The electoral authorities say that some 90 percent of registered voters cast their vote.
By Siân Ruddick
Downloading PDF. Please wait...
Tuesday 25 October 2011

The first genuine elections in over 40 years were held in Tunisia this week. The electoral authorities say that some 90 percent of registered voters cast their vote.

Early indications showed that a previously banned Islamist party, al-Nahda, had won around

40 percent of the vote and was ready to build a coalition with two leftist parties.

One looks set to be the Congress Party for the Republic, a secular centre-left organisation that was banned by dictator Zine El Abidine Ben Ali. The other is likely to be Ettakol, which played an opposition role in the dictatorship.

Representatives from Ettakol were banned from running in the 2008 presidential elections. They could not win any seats in parliament because of Ben Ali’s iron grip on all state institutions.

This new government will be temporary. It will have a 12-month term to rewrite the constitution and start to re‑order the state.

Protests in Tunisia in December last year sparked the uprisings across the Middle East and North Africa.

As they spread across the country and finally gripped the capital, Ben Ali and his corrupt family gathered up the gold and fled on 15 January this year.

Mohamed Ghannouchi, an ally of the old regime, stepped in as prime minister—but was deposed by huge protests just months later.

There are challenges ahead for Tunisian democracy. During the voting there were small protests by people saying corruption and bribery were still rife and party officials were trying to buy votes.

And many are concerned that the elections will give strength to forces that do not reflect the demands of the revolution. 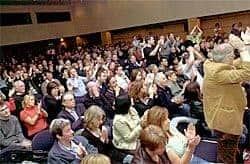 Solidarity's campaign has won a great reception in Scotland

Unite Against Fascism: union boosts the battle against BNP