Hundreds of delegates will be coming from trade unions and colleges

This article is over 16 years, 8 months old
The civil service workers’ PCS union is among those sending a national delegation to the conference.
Downloading PDF. Please wait...
Saturday 03 December 2005

The civil service workers’ PCS union is among those sending a national delegation to the conference.

The union’s vice-president, Sue Bond, says, “The national executive is sending five delegates, but there are also delegations from branches and regions.

“There is a lot of enthusiasm in Manchester, where I work. News of the use of white phosphorus and of the systematic torture in Iraq has really got to people.

“It’s all coming out now, despite the government trying to keep a lid on it.

“So there are wider numbers of people talking about the occupation and what can be done to end it.

“It’s particularly exciting that Cindy Sheehan, whose son was killed in Iraq, will be travelling from the US to speak at the conference.

“She has played such a role in revitalising the anti-war movement there.

“There is going to be a large presence of PCS members at the conference.

“I think it will play a significant role in putting pressure on Blair to get the troops out.”

Other unions backing the conference nationally include the Communication Workers Union, whose general secretary Billy Hayes is now speaking at it, and the T&G union, which is circulating branches with details.

“There will be a significant delegation of T&G members from Glasgow and the west of Scotland,” says T&G activist Dave Sherry.

This week the Fire Brigades Union in Strathclyde joined the growing list of delegations.

There will be large numbers of student delegates from Stop the War groups and student unions.

Nick, a student from Middlesex University in north London, says “We have 14 delegates from our student union going to the conference already.

“It’s really not very hard to convince people that this is something that we should be involved in.

“As the war rolls on, it just gets clearer that we should never have gone into Iraq in the first place.

“This conference will be a wonderful opportunity to bring people together, so that we can fight together to end the occupation of Iraq.

“We will continue to let people know that the conference is happening, with leafleting on campus, among other things, to encourage more people to go.

“It’s really important that people use this conference as more that just a great day out.

“People need to come away with real ideas about what we can do.”

Students at Nottingham Trent University are currently organising a delegation for the conference. John says, “People are really excited about it.

“There’s been a lot of discussion about why it is so important for students to support it. A few people have signed up already, but we want as many people as possible to come along.

“This is a real opportunity to get people involved in the Stop the War group at Trent.” 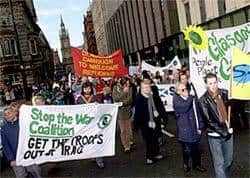