Sections of the outer fence of Yarl’s Wood immigration detention centre were torn down today, Saturday, as some 700 people protested outside to demand its closure.

They had gathered at the gate and marched around the perimeter of the centre, located near Bedford, to a place where the detained women could hear them chanting. Many shook the outer fence until sections of it came down.

Protesters and detainees joined in cheers. Chants of “Shut it down” echoed around the fields which surround Yarl’s Wood.

One woman who had come with Women Asylum Seekers Together told Socialist Worker, “This is the first time I’ve actually seen Yarl’s Wood and whatever they call it, it’s just a prison.

“Seeking asylum is not a crime. We should be protected and treated with dignity. But people are detained and forced to live in fear.

“I have friends who jump every time they hear a car door outside because they think it is people coming to detain them again.”

Yarl’s Wood is the main centre for holding women refugees whose claims have not been accepted. They are forced to stay there as they await appeals or deportation as “failed asylum seekers”.

Sophie Radice from Women for Refugee Women, which called the demonstration, spoke to Socialist Worker. She said, “Today’s protest comes out of a year and a half of campaigning. We have produced two reports on how people are treated in Yarl’s Wood. The second one covered the very inhumane treatment of the women inside by the staff.

“This led to us being involved in Channel 4’s news programme with undercover filming inside. After that we felt that the issue was getting a national response. A lot of detainees themselves told us it was time to call a demonstration.

“We will carry on campaigning and coming here.”

She is angry at the government’s plan to make anyone who wants to appeal against a decision to deport them wait until after they have been sent back to the country they fled.

“It’s frankly inhuman. It’s against the whole ethos of asylum,” she said

Protester Robbie Islam said, “Everyone has a right to be safe. This country always says it has a great record of helping vulnerable people. Well they should shut down places like this to prove it.”

Human rights barrister Helena Kennedy, head of Liberty Shami Chakrabarti and Green Party leader Natalie Bennett were among the speakers who addressed a rally at the start of the protest. Other speakers included celebrities Juliet Stevenson and Josie Long. 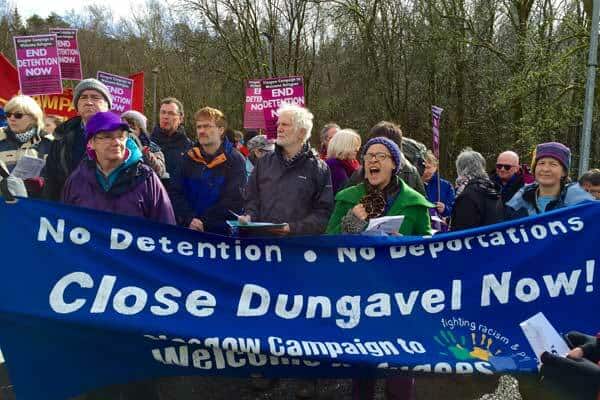