Despite various rhetorical nods to low paid workers not being priced out of a pension, the report is a green light to chancellor George Osborne to launch a widespread attack on public sector pensions, most likely when he announces the comprehensive spending review on 20 October.

George Osborne has given his backing to the review, describing it as “very impressive and substantial.” This is no surprise as the Tories’ “big society” ideas hinges on destroying the welfare state in order to drive down state spending, and that means smashing the rights of public sector workers.

But Hutton’s report is full of lies and pensions myths.

But his answer is to encourage a race to the bottom.

Women working in local government average a shocking £1,600. They are expected to spend their retirement living on a pension from work of less than £5 a day.

Public sector pensions are not going up either. The average NHS pension has not gone up at all over the last decade and the teachers’ pension has fallen in real terms by 4 percent.

An increase in the amount workers contribute to their pensions amounts to a pay cut.

And when combined with the widespread pay freezes, allowance reducations and removal of overtime and weekend working taking place across the public sector, many workers, particularly those who work part time will be unable to afford a pension and will opt out of the schemes.

And to add insult to injury, the super-rich then get generous tax relief on their pensions.

The richest 1 percent in society get 60 percent of all pension tax relief – the equivalent of £10 billion a year.

For every pound we spend as taxpayers on public sector pensions, we pay £2.50 subsidising the pensions of this tiny minority.

Talk of people “living longer” as though that is a terrible problem is a disgrace. If it was true, we should celebrate it—but unfortunately, for the poorest people in society, it is far from a reality.

For most working people, life expectancy has only risen by less than two years since the 1970s. Life expectancy for the average female hospital cleaner, for example, has not increased by one day since then.

Many people, especially manual workers, are still only predicted to live until the age of 65 – meaning they’re likely to die before they get any pension whatsoever.

Hutton also accepts as given that there is a pensions black hole and a funding crisis.

But as Socialist Worker and much of the trade union movement argued then, this is nonsense, and it remains so.

The real story is the way both Labour and Tory governments have repeatedly slashed the cost of public sector pensions—in 2005 £13 billion was cut from pensions by raising the retirement age to 65 for new entrants.

And let’s remember who have the real unaffordable pensions—the rich bosses who want to make workers pay for the crisis.

According to the TUC, the biggest director’s pension at oil giant BP is a staggering £21.5 million.

The vast majority of company directors get to retire at 60 or earlier – with “golden goodbyes” that for some are worth millions of pounds tax free.

Former RBS chief executive Fred Goodwin quit the bank when it collapsed, sacking thousands of workers. He walked away with not only a £345,000 a year pension, but also a £2.8 million lump sum – on which RBS paid the tax.

Why should the workers who keep society running suffer, just so that the rich who caused the financial crisis can continue to make money out of our sweat?

The truth is that public sector workers continue to provide the foundation for our society—our health, social and welfare needs. Without properly funded public services and workers on decent wages and conditions, the quality of care and service we rely on would plummet and so would our standard of living.

It is vital that TUC and the trade union union leadership responds to this attack, sending a clear message to Osborne and his millionaire pals in the cabinet, that there will be coordinated strike action.

“The summary of the ConDem pension enforcers’ proposals is clear—work longer, pay more and get less. This attack on the people who make this country tick will spark a furious backlash and will drive millions onto the streets in French-style protests to stop the great pensions robbery.”

“FBU members will be united in their anger when they see this attack. They will feel betrayed and will demand that we oppose this unacceptable assault on their pension schemes. We will join with other public sector unions in protecting pension schemes and industrial action cannot be ruled out at this point.”

“We agreed a fair scheme in 2007, after threatening joint industrial action with the other unions. We do not accept the need for further review, which clearly forms part of the Government’s wider assault on the low-paid, the public sector and the welfare state.”

“We are adamant that the final salary scheme should be retained…Public sector workers already pay a sizeable amount into their pension schemes year in, year out. Many of our members would struggle to pay more. Council workers, including home carers, librarians, social workers and dinner ladies, pay in 6.4 percent of their wages, while NHS workers pay an average of 6.6 percent. Plans to make public sector staff work until they drop will hit the low paid hard. For many public sector staff, working longer is not an option. Many nurses, home carers, paramedics and refuse collectors are already forced into early retirement because of the physical nature of their jobs, and the damage it does to their health.”

“This would amount to a savage pay cut when members are already suffering a two-year pay freeze. Civil servants have also been subjected to a recruitment embargo, job cuts and attacks on their terms and conditions. They are in no mood to accept unfair and unwarranted attacks on their pension scheme. Pension schemes need long-term, stable management and not knee-jerk responses to the latest fiscal crisis. These new proposals have nothing to do with remuneration levels or the sustainability of public sector pensions. They are simply a crude method of using public sector workers to pay down more than their fair share of the deficit.

“If the coalition government does proceed to seek to make further changes, it will only be because the public sector is once again being made to pay for the financial recklessness and greed of others.

“Today’s report will cause all teachers and public sector workers huge concern.

At a time when public sector pay is being frozen, any further attack on teachers’ pay is a grave problem. It risks driving teachers, particularly those at the beginning of their careers, away from the profession. Although Hutton’s comments on avoiding a ‘race to the bottom’ on pensions are helpful, his recommendations would do nothing to tackle the real problem of a lack of pension provision in the private sector.”

Christine Blower, general secretary of the National Union of Teachers

For background go to Government lies about public sector pensions 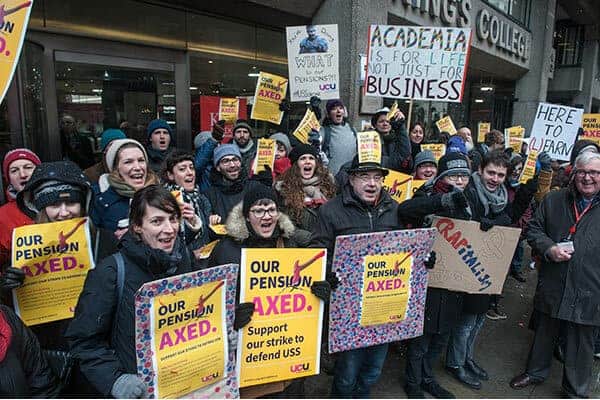