Tory work and pensions minister Iain Duncan Smith has threatened to cap child benefit for people who “have more than, say, two children”.

Katrina, an unemployed single parent with six children, pointed to the hypocrisy of the Tories’ attacks.

“I was married when I had my children and we both had jobs,” she told Socialist Worker. “But my marriage didn’t work out and I got made redundant.

“I shouldn’t suffer for that—and my children certainly shouldn’t. It shouldn’t be up to the ruling class to decide how many children working class people have.”

Duncan Smith blames unemployed people for their lack of work. In reality the jobs simply aren’t there. Up to 66 people are chasing every retail job, according to the Joseph Rowntree Foundation.

And the number of people on benefits in Wigan, where Katrina lives, is on the rise. “Employers can choose who to take on,” said Katrina. “They aren’t going to choose someone with six children.”

Now Katrina lives with the constant stress of trying to make ends meet. “The government give you barely enough to live on,” she said.

“I wasn’t able to buy the children’s school photos this year. The cheapest package was £15 and I just didn’t have the money. How do you explain that to your children?

“I haven’t paid a bill so that my eldest son could go on a school trip. We shouldn’t have to make those choices.”

Katrina has already lost money because of government penny pinching. Her eldest son is autistic—but she was told that because he went to college, he would lose his Disability Living Allowance.

“That cost me £60 a month,” she said. “And I have to pay £170 a month towards my rent. My children go to their dad’s house three nights a week. So I’m only entitled to a three bedroom house.”

Now she fears she could lose more. Katrina is due to be put on a government work programme that will last for two years. If she is deemed not to be doing enough to find work then she could lose her benefits for three months.

“It’s a real concern as my youngest is five,” she said. “They might get me an interview for a night shift job and if I don’t go I’ll lose my benefits. They’re making it so that people lose their benefits.”

Katrina says the stress is affecting her mental health. She said, “I’m worried for my children’s future. To be on benefits with children is stressful—having to worry about whether the gas and electricity will last to the end of the week.

“I want to be able to take them places. But I can’t even afford a weekend away.”

Making it harder to work out of poverty

The Tories say that work is the way for poor people with children to escape poverty. In reality many do have jobs—yet the more they work, the more money they lose.

A new report shows that childcare costs, combined with a benefits system based on means-testing, can almost stop it being worthwhile to work.

The report, by the Resolution Foundation, says that second earners in families see much of their earnings eaten up by tax, national insurance and childcare costs.

Second earners are usually women. Second earners lose an average of 68 pence of every pound they earn. But the poorest lose up to 96 percent because they lose housing and council tax benefit.

It looks at a scenario where a couple with a four and two year old both earn the minimum wage. “The family is only £296 better off a year if the second earner increases her hours from zero to 25 hours per week,” the report says.

“If she works more hours to become full time, the family is only £211 better off per year. Overall, the incentives for the second earner to enter and progress in work are very weak, becoming negative as she approaches full time hours.”

The picture is only slightly better for people who earn a bit more. If the second earner in a “middle income” family works more than 13 hours it becomes “disadvantageous” for her to keep working.

The Tories are making the situation even worse. Currently poor families can receive extra housing and council tax benefit payments if they have to pay for childcare.

This enables them to have up to 96 percent of their childcare costs covered. But the Tories’ universal credit benefit will cut them. This will affect 100,000 families who will be “significantly worse off”.

The report warns that many mothers could drop out of work altogether. “Providing further means-tested support will only eat up more of each pound earned,” it says. Instead it calls for investment in affordable, non-means-tested support for childcare. 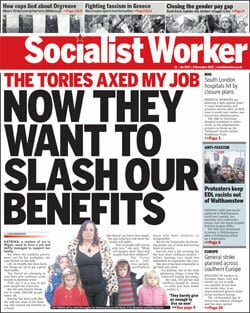 'The Tories axed my job. Now they want to slash our benefits'