‘If we can organise united strikes, so can you’

Just four days after Saturday’s TUC march, teachers in two London boroughs are set to show how to take the battle against cuts forward.

In Tower Hamlets, east London, and Camden, north London, thousands of members of the NUT teachers’ union will strike on Wednesday of next week.

And as Socialist Worker went to press, Tower Hamlets council workers in the Unison union voted 75 percent yes to strikes. They hope to join our Wednesday walkout.

This is what activists should be pushing for everywhere in the wake of Saturday’s demonstration, if we are to stand a chance of stopping the cuts.

There is nothing unique about the cuts facing these two boroughs.

The key to getting the strikes was the conscious decision by leading activists in the NUT and Unison unions to go out and win them.

Our central argument was about solidarity. The cuts this year are just the start—so teachers across the borough should strike together, not just leave it to those directly affected, we argued.

The campaign wasn’t left to branch officers with facility time.

Instead school reps and activists were involved in a detailed battle plan of dozens of school meetings, culminating in the biggest NUT union meeting in the borough for decades.

This meeting voted unanimously to ballot for action—and the result was 85 percent yes.

Camden, which followed the same approach, delivered an 85 percent vote for strikes too.

Our strike next week will not be a passive affair.

We aim to put the unions at the heart of a wider revolt of working class communities against the cuts.

We are leafleting parents, asking them to come and join our demo. We will be leafleting local workplaces, asking for delegations to join our protest.

And, of course, we will be joining UCU lecturers on their picket lines this week too—and marching on Saturday’s TUC protest.

Our own demonstration next week will end with a rally in the borough’s London Muslim Centre, to send an important message that we will not let our resistance be divided by racism either.

The TUC march must be only the start of a serious fight to stop this government in its tracks.

There is nothing special about Tower Hamlets or Camden. If we can do it, so can you. Take the spirit of 26 March and go for it!

After 26 March - how do we smash the Tories? 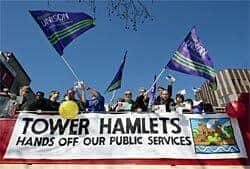 Fury at the bankers on the streets of Tower Hamlets