This article is over 18 years, 6 months old
ARCHIE FROM south London says that a sale at a student hall of residence was a big success. Three people sold 14 copies of the paper in just one block of residences used by art students from across London.
Downloading PDF. Please wait...
Saturday 17 January 2004

ARCHIE FROM south London says that a sale at a student hall of residence was a big success. Three people sold 14 copies of the paper in just one block of residences used by art students from across London.

The sellers also put up posters and gave out leaflets for the 27 January demonstration against fees.

“The sale helped to link up people who wanted to fight fees and increase support for the demo,” says Archie.

THE REGULAR sale at Romford post office has been going well since the strikes last year. Sellers take turns to do the sale at lunchtime and they say that the daylight helps a lot when doing a petition.

A petition against top-up fees was a big success and helped boost the sale to eight including a union rep, an African man and two Asian women. One woman postal worker grabbed the petition as soon as she saw a picture of Blair and said she would sign anything against him!

Respect on the Feltham sale

SELLING THE paper can link up with other initiatives.

On the Feltham post sale this week there was a great response to leaflets about the electoral coalition against New Labour. Six papers were sold. One Asian couple told sellers they were Labour Party members but were totally fed up with what New Labour had done. They said they were enthusiastic about a left alternative and were going to take the leaflets about it to their Labour Party branch.

Two Camden Socialist Worker sellers also showed last week how the paper fits into being part of wider campaigns. They sold four copies of Socialist Worker to tenant activists at a reps meeting, 13 at a Camden Stop the War meeting, two on a Palestine Solidarity picket and seven to council workers.

ANYONE WHO talks to civil servants knows there is a huge feeling against the pay deal and a strong feeling for strikes over the issue.

There were good sales from Sheffield to Hounslow and many places in between! Several sellers found that PCS union members are holding office meetings to discuss the strike ballot. It would be good to get reports on such meetings in to Socialist Worker. 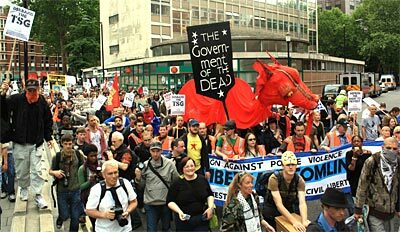