This article is over 16 years, 8 months old
There are many unanswered questions about the death of Jean Charles de Menezes and the subsequent statements made by the Metropolitan Police.
By Joseph Choonara
Downloading PDF. Please wait...
Saturday 27 August 2005

There are many unanswered questions about the death of Jean Charles de Menezes and the subsequent statements made by the Metropolitan Police.

On the day of the killing Ian Blair suggested the dead man was “directly linked” to the police’s anti-terrorist operations. But the only connection was that Jean happened to live in a block of flats the police had under suspicion.

The soldier attached to the Met who saw Jean leave the building recorded that he was “a U/I [unidentified] male IC1 [white] 5ft 8in dark hair beard/stubble”. But the suspect police were waiting for had been captured on CCTV and it was known that he was not white.

It is still unclear at what point police began to suspect Jean was a suicide bomber. Nor is it clear why the police let him board a bus and later enter a tube station without stopping him.

Ian Blair claimed that “the suspect’s clothing and behaviour added to our suspicions”. The impression given by early witness statements, and left unchallenged by police, was that Jean was wearing a thick coat.

But the same soldier who initially observed Jean wrote in his notepad that he was wearing a “blue denim jacket, blue jeans and wearing trainers… he was not carrying anything”.

There was nothing suspicious about Jean’s appearance or behaviour. But the pathologist’s post mortem report, written in the presence of senior police officers on 27 July — five days after the shooting — still contains a false version of events.

It states that Jean “vaulted over the ticket barriers” and that he “ran down the stairs of the tube station”.

By the time these words were written police knew the truth — that Jean calmly entered the tube using his travelcard, picked up a free newspaper and walked down to the platform.

Nothing was done to correct confused witness statements or earlier incorrect versions of events put forwards by police.

The home office added to the confusion by suggesting that Jean may have run because he was worried that his visa had expired, a claim they were later forced to withdraw.

Ian Blair also said on the day of the shooting, “As I understand the situation, the man was challenged and refused to obey police instructions.” But it now appears there was no challenge.

Even the early accounts of the shooting itself have turned out to be false. Initially it was claimed that Jean tripped while running onto the tube and was shot five times while lying on the floor.

It later emerged that Jean was seated when he was shot, with one police officer pinning his arms to his sides as another fired seven bullets into his head and one into his shoulder. Seven undercover officers were in the same tube carriage as Jean when he was shot.

While inaccurate and false storied were allowed to circulate freely, Ian Blair was taking action to try to block an inquiry by the Independent Police Complaints Commission (IPCC).

Within hours of Jean’s death, he wrote to the permanent secretary at the home office to argue that an internal investigation should take place instead of an independent inquiry.

He was eventually overruled, but it was three days before the IPCC attended the scene of the killing and began their investigation. The IPCC would normally be on the scene within hours of a fatal shooting by police.

Finally, there is an unresolved question of the CCTV footage from Stockwell tube. Police claim that tapes taken from the station are blank.

But a senior union official on the underground has said, “There was nothing wrong with the cameras. The tapes are replaced every night as a matter of course.”

Harriet Wistrich and Gareth Peirce, the lawyers for the de Menezes family, have summed up the situation, saying, “It is inconceivable that the true facts were not made known to senior police and ministers immediately.

“For any to have made comments publicly without first informing themselves of the true facts would have been entirely reckless and wrong.” 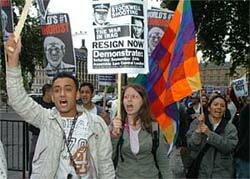