This article is over 11 years, 10 months old
A jury at the inquest into the death of Paul Coker found that lack of communication and inadequate police training contributed to his death.
Downloading PDF. Please wait...
Thursday 04 March 2010

A jury at the inquest into the death of Paul Coker found that lack of communication and inadequate police training contributed to his death.

Giving evidence at Southwark Coroner’s Court, Lucy Chadwick told jurors that her boyfriend had become “a bit paranoid” after taking cocaine and cannabis and that she wanted him to leave rather than see him in that state.

Following a call to the police, she says she heard a number of officers enter the room which Paul was refusing to leave.

She heard officers take him away and told the jury, “He was saying, ‘You are hurting me, I can’t breathe, you are killing me’.”

The inquest heard that approximately five minutes after Paul was pronounced dead, one officer in the custody suite can be heard on the CCTV footage saying, “You have to get one death in custody under your belt.”

The jury found that failures in police training, and their failure to communicate properly with each other and with the forensic medical examiner meant they did not recognise that Paul was suffering with ED/ABD, a form of excited deliverium/acute behavioural disorder that can be life-threatening unless treated immediately.

The inquest saw CCTV footage from inside Paul’s cell. It showed him lying face down on the floor for approximately 15 minutes, not moving, before he was pronounced dead.

The police did not allow the forensic medical examiner into his cell in case Paul attacked him or any officers.

Deborah Coles, co-director of the campaign group Inquest, said, “Any perception that Metropolitan Police training has improved so that another death like that of Paul Coker would not happen today is grossly misconceived.”

Paul’s mother, Patricia, said, “This verdict is a condemnation of the failures of the police and the police doctor to care properly for my son when he was clearly very ill and in need of urgent medical attention.

“Had Paul been recognised as a medical emergency and taken straight to hospital there was a very good chance he would have survived and been with us today.”

Go to » Inquest for more information 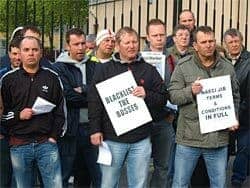