George Bush is ending the pretence that Iraq is a “democratic state”. He is imposing new “security accords” that will strip the country of its sovereignty and allow it to be used as a platform to launch more wars.

This is the thrust of a secret treaty – known as the Status of Forces Agreement – that is being imposed on the country.

Even the puppet Iraqi parliament and its pro-occupation allies have found it difficult to stomach.

Tens of thousands of Iraqis took to the streets last week as the provisions in the “accords” were leaked to the Arabic ­newspaper Al-Hayat.

Bush wants to establish 400 permanent military installations, including bases near the Turkish, Iranian and Syrian borders.

According to one pro-US Kurdish leader these bases will “exist for the next 15 or 20 years”.

Included in the treaty is the right for the US to launch wars on “third countries” from Iraqi soil.

This is a direct threat against Iraq’s neighbours and another step towards a war on Iran.

But for many Iraqis, the biggest insult in the new treaty is that all US troops, citizens and mercenaries – the so-called contractors – will be immune from Iraqi law.

Under these terms, occupation forces can use deadly force under any conditions, giving them a green light to arrest, imprison or kill any Iraqi with no fear of prosecution or regard for the country’s institutions.

Also included in the treaty is a provision that all deals and undertakings for reconstruction contracts negotiated since the occupation began will become null and void. This clears the way for a US monopoly over the economy.

The US previously agreed to share these contracts with Iraqi firms in an attempt to draw them into co-operating with the occupation. But this strategy failed to quell resistance to the occupation. So now the US wants unlimited access to, and control over, the country’s wealth.

Britain and the US repeatedly said in the run-up to the invasion that they would respect Iraq’s sovereignty, end repression and build a democracy. Now they no longer bother with that lie.

But as before, the US has seriously miscalculated.

A broad spectrum of Iraqis have condemned the deal, which is due to be signed by prime minister Nuri al-Maliki before the end of July.

Rebel Shia cleric Moqtada al-Sadr, who has led three uprisings against the occupation, denounced the accords as “a project of humiliation”.

The Association of Muslim Scholars, the mouthpiece of the mainly Sunni Muslim sections of the resistance, said the deal would pave the way for total “military, economic and cultural domination” of the country.

Tariq al-Hashimi, Iraq’s vice‑president and a stalwart of the occupation, said the country’s sovereignty is a “red line” which the US is attempting to cross.

Grand Ayatollah Ali Sistani, the highest Shia Muslim authority in Iraq, is demanding a popular referendum. He said he would not allow Iraq to sign such an accord “as long as he was alive”.

Even Abdul Aziz al-Hakim, the leader of the pro-US Badr Brigades, has objected.

Faced with this growing opposition, US ambassador Ryan Crocker threatened to strip Iraq’s puppet regime of any authority if it refused to rubber stamp the accords.

The latest US plan for Iraq confirms the worst fears of the anti-war movement in the run‑up to the invasion.

We warned then that behind the talk of “humanitarian intervention” and “democracy” lay a plan for total subjugation and endless war.

These accords show how that plan can become a reality.

The fight is still on to stop US and British warmongering in the Middle East and around the world. For this reason we have to turn out in massive numbers to protest against George Bush’s visit to Britain on 15 June.

For more on the demonstration go to » www.stopwar.org.uk

Video of Tony Benn addressing the demo in London, 24 February 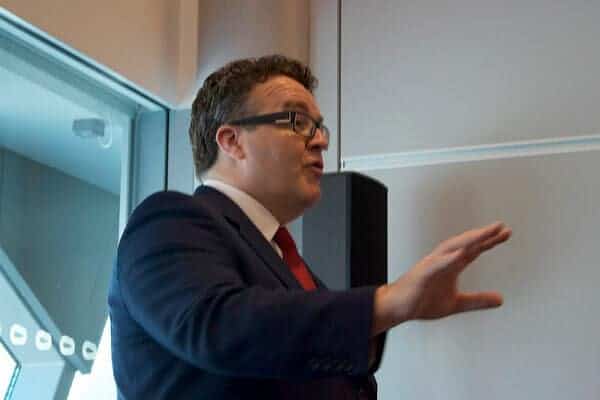 Oil and US power behind the lies