This article is over 13 years, 11 months old
Irish voters will cause consternation among Europe’s elite if they reject the undemocratic and neoliberal Lisbon treaty, writes Sinead Kennedy
Downloading PDF. Please wait...
Tuesday 29 January 2008

Ireland is the only country in the European Union (EU) that will get to vote on the EU reform treaty, known as the Lisbon treaty. This treaty is a power grab of unprecedented proportion on the part of the EU. It involves the transfer of powers from member states to the European Council and European Commission.

The treaty will accelerate the militarisation of Europe and guarantee that Europe will develop a neoliberal economic framework undermining public services and workers’ rights.

The treaty is essentially a redrafted version of the 2005 EU constitution, which was rejected by people in France and the Netherlands.

The media and the government have continued to misrepresent the nature of these rejections. They argue that the EU failed to effectively “communicate” its message or that people did not understand the constitution.

However, in both countries there were intensive, popular education campaigns where tens of thousands of people attended meetings. In France, the constitution was on the bestsellers’ list for several weeks.

The second argument is that the vote was right wing and nationalist.

But the No vote in France – and to a lesser extent in the Netherlands – came from the left. A poll showed that 55 percent of No voters were supporters of left parties, while just 19.5 percent were supporters of the fascist politician, Jean-Marie Le Pen.

The main opponents of the constitution were anti-globalisation campaigners such as Attac, public sector unions and left wing political parties.

Susan George, a leading No campaigner, said, “It was, of course, a class vote with the only socio-economic group registering a majority Yes vote being company managers and directors.”

The Amato group, which was drawn from the European political elites, went on to redraft the constitution into the Lisbon treaty.

This group developed a strategy of creating a complex and unreadable document that would discourage scrutiny. But they let slip their real agenda. Jean Dehaene, one of the key participants in the Amato group, said that it was “dangerous talk to want too much transparency and clarity”.

With the Lisbon treaty they can say, “It’s absolutely unreadable and the typical Brussels treaty, nothing new, no need for a referendum.” The matter can then be kept in the hands of the ruling elites who will ensure it is accepted.

However, Ireland may just create a hiccup in their plans. The Irish constitution requires a referendum on the treaty and the Irish electorate rejected the Nice treaty in 2001. But then, in true democratic style, they were forced to vote again and “get the right result”.

The Irish political elite is seriously worried. A recent opinion poll suggests that 62 percent of people are undecided and that support for the treaty has halved.

While the referendum probably won’t take place until May the debate is already characterised by deceit and bullying.

All the major parties in Ireland, including the Labour Party, support the treaty. The trade union leaders, who are wedded to government policy because of “partnership” policies, have failed to provide any real leadership on the issue.

None of the major trade unions have, as of yet, adopted an official stance on the treaty. However, significant numbers of rank and file members are opposed to it, particularly in the aftermath of the Laval ruling by the European Court of Justice which failed to protect union rights.

The Irish Green Party entered into a coalition government with the right wing Fianna Fail party last summer. The Greens have always had a strong tradition of opposing European treaties.

Indeed the Greens were strongly critical of the Constitution, arguing that it was anti-democratic and would create the framework for a European superstate. Now that they are in government the story is very different.

They don’t have an offical position on the treaty but the leadership of the party will be calling for a Yes vote.

The media is anxious to tar anyone who campaigns against the Lisbon treaty with a right wing brush. They have declared that the Libertas group is the leadership of the No campaign.

Libertas is headed by businessman Declan Ganley. He argues that the treaty does not give big business enough opportunities to engage in cut-throat competition and the privatisation of public services.

The media have also been suggesting that Le Pen will be “assisting the No campaign”.

However, there is also a significant left wing No campaign emerging. It may be ignored by the media but it has attracted hundreds of people to meetings across Ireland. Socialists oppose the Lisbon treaty on progressive grounds.

We argue that the real question is not whether we are for or against Europe but what kind of Europe we want. Do we want the EU to continue to be more answerable to the needs of big business than to the wider population?

Do we want to see a European army emerge to fight the resource wars of the 21st century? Or do we want a Europe that enshrines the spirit of 15 February 2003 when millions marched against George Bush’s wars?

Sinead Kennedy is the editor of the »  www.voteno.ie website 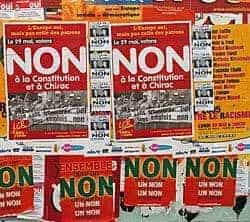 How the British left can take up Europe