Is Britain about to go bust?

Is Britain about to go bust?

WHAT A difference a year makes. Last summer the supporters of capitalism were rejoicing in what they claimed was an unprecedented American boom. The Asian crisis of 1998 had been no more than a shortlived blip, they said. There would, in the endlessly repeated words of Gordon Brown, be “no return to boom and bust”. Now the discussion in the financial pages of the posh papers is about one thing-how big the bust is going to be.

The high priest of capitalism-Alan Greenspan, head of the US Federal Reserve bank-spelt it out six weeks ago: “Do we have the capability to eliminate booms and busts? The answer, in my judgement, is no.”

“Data indicates the possibility that recession began recently,” says the US National Bureau of Economic Research, noting that industrial output has fallen for eight months running.

The tone is mild compared to a report from one US financial analyst which is called, “Help! I’ve Fallen And Can’t Get Up.” The first signs of crisis in the US appeared suddenly just before Christmas. Until then the dominant view was that American capitalism had discovered a “new paradigm” based upon high tech industries which had magicked crises away forever.

But the mood changed when the stock exchanges started sliding down and firms centred upon the internet went bust by the score. Even giants like General Motors reported falling profits and began sacking workers. For a couple of weeks there was a very real sense of panic. But then a few soothing phrases restored a degree of calm to those who run the system. The crisis, it was said, was in the “new industries” where there had been a “bubble”, but the rest of the US economy was “fundamentally sound”. Even if America was in trouble this would not spread to Europe, which was ready for a new boom.

And Alan Greenspan was a wonderman, who had stopped the Asian crisis from spreading and who knew how to “tune” the US economy. This was exactly the message New Labour wanted in the run-up to a general election in which it boasted of the wonders of the free market and the “enterprise” of big business.

But even while people were voting, the message was sounding increasingly hollow. William Keegan, the perceptive economics editor of the Observer newspaper, wrote about “the just in time election” and pointed to the deep economic difficulties awaiting the government.

The three things that were meant to keep the world economy in good shape have gone awry. The crisis in the US has spread from the “new” industries to the old ones. One major firm after another has announced falling profits. Manufacturing employment has been falling since last August. The European boom has proved to be a mirage. Manufacturing activity in the eurozone has started to contract and industrial output is falling in France.

Finally, even the stock exchanges are beginning to have doubts about the effectiveness of Alan Greenspan’s magic. He cut interest rates once again at the end of last month. This might encourage some Americans to buy new consumer goods with borrowed money-and so keep some factories open a little longer. But this will make two central problems with the US economy worse-the already very high levels of personal indebtedness and the vast excess of US imports over US exports.

Greenspan cannot deal with the root causes of the developing crisis because these lie in the capitalist organisation of the economy itself. One of the central features of capitalism is that workers get paid less than the total amount of wealth their labour produces. The rest goes to profits and dividends.

The economy can only function properly if all the goods produced are sold. Workers only have enough money from their wages to buy a portion of these goods. The rest will be sold only if those who receive profits-the capitalist class-are willing to spend them on either luxuries for themselves or investment in new plant and machinery.

If the capitalists are not prepared to use their profits like this, much which is produced cannot find a market. Firms cut back their output and lay off workers. But workers can then buy fewer things for themselves. There is a further reduction in the market, leading to layoffs in other industries.

During booms the whole system seems to work wonderfully-at least for the owners of capital. As long as profits are high, the rich are prepared to spend some of their profits and dividends on new investment. Everything produced is sold as new industries start up and employ more workers. This is what happened in the US, and to a lesser extent in Britain, in the second half of the 1990s.

The share of US output going to profits doubled and profits rose by an average of 10 percent a year. The growing expenditure of the rich on luxuries and of firms on investment kept the economy going flat out. Meanwhile American workers were actually paid less than they had been a quarter of a century previously.

This is despite the fact that the average working year had risen by 160 hours for men and 200 hours for married women. Rising profits were brought about by a massive increase in the level of exploitation of the US working class. This was the real secret of the so called “new paradigm” that pro-capitalist commentators talked of. But it only required something to shake the confidence of America’s capitalists and the whole boom would come untangled.

This has happened with every previous boom in the history of capitalism-and it happened this time. There were two limits on how far profits could expand. One Karl Marx pointed to 120 years ago.

Under capitalism the trend is for individual investments to get more costly, so that even if profit grows it does not grow as rapidly as investment. This leads to a fall in profits per investment-the rate of profit. Second, there was a limit to the willingness of American workers to put up with longer hours for lower wages. These two factors have come together over the last year or so to produce a fall in profits of about 1.2 percent. The crisis cannot avoid spreading from the US to other countries.

During the boom capitalists across the world poured their money into the US because it seemed to them that they could make the biggest profits there. US firms used foreign money to expand even more than they would have otherwise. US banks and credit companies lent foreign money to American workers to buy more consumer goods, despite the fall in their real wages.

Now if US firms go bust and US workers cannot afford to pay off their debts, it not only makes the crisis deeper in the US but also richochets across the world. Already the American crisis has damaged the economies of countries like Turkey and Argentina, and this in turn is causing worries among those who run the world’s banks. Such are the complexities and absurdities of the capitalist system that no one can see exactly what form the crisis will take or how rapidly it will develop. It may erupt very quickly or it may be delayed for a time by Greenspan’s measures.

But the delay cannot be indefinite. And, whatever Gordon Brown says, Britain is not immune to a developing world crisis. Any economic crisis shakes up people’s lives. It causes bitter rows between those at the top of society, as each capitalist tries to shift the burden of the crisis onto someone else.

And it causes anger and despair among great masses of people as all the promises made to them in the boom turn to dust. Even before the crisis has matured in Britain, there is a widespread alienation of people from the established political structures. The low turnout in the election proved this.

Any economic crisis will multiply this alienation many times over. The key question facing socialists will be whether the left is capable of providing this alienation with a strong anti-capitalist direction. 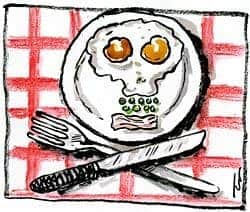 Refugee who resisted forced deportation: 'We are people too'