ARIEL SHARON, the new Israeli prime minister, is threatening the Middle East with a new war. Over the Easter weekend Israeli forces invaded Palestinian territory and attacked Syrian troops in Lebanon. As Israeli defence minister, Sharon launched the 1982 invasion of Lebanon in which 20,000 people died. Now he is stoking up regional tensions again. Since the beginning of the Palestinian intifada, or uprising, six months ago almost 500 people have died, most of them Palestinians. Israel has kept Palestinians in poverty and oppression since it seized the West Bank and Gaza in 1967.

During Easter weekend Israeli tanks and bulldozers invaded the town of Rafah in Gaza and fired missiles into apartment blocks, forcing hundreds of men, women and children to run screaming into the streets. They then bulldozed 15 shacks, the homes of 100 Palestinian people, destroying almost all their possessions in the process. Thirty five people were wounded, including a young boy whose leg was cut off by an Israeli shell.

The Israeli army announced that this attack and the destruction of Palestinian homes was “engineering activity”. On Monday night Israeli helicopter and navy gunships bombed Arafat’s security section in central Gaza in retaliation for mortar attacks on Israel.

Armoured bulldozers rolled into Palestinian-controlled areas in north Gaza. Sharon is also spreading the violence to the rest of the region. Early on Monday morning an Israeli air attack on a Syrian radar station in south Lebanon killed three Syrian soldiers and wounded five.

Everybody opposed to oppression should continue to back the Palestinians’ fight for justice and condemn Israel’s violence. 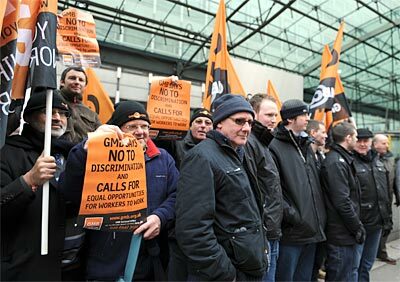 Protest over exploitation in construction