THE PALESTINIAN revolt against Israel has rarely made the front page of the newspapers over the last few weeks because of the farce of the US presidential elections. But Israeli violence against Palestinians is becoming more brutal two months into the new intifada, or uprising.

Some 280 people had been killed by Monday of this week. Over 90 percent of the victims were Palestinians. The Israeli army bombed the village of Kfar Shouba in southern Lebanon with at least 100 shells on Sunday.

This was Israel’s biggest attack on Lebanon since May, when it was forced to withdraw after 22 years of military occupation. The military and economic blockades that the Israeli forces have put up throughout the Occupied Territories of the West Bank and Gaza Strip mean that around 1.5 million Palestinians will go hungry.

In Gaza hundreds of thousands of refugees are penned into concrete warrens, a third of the workforce have been thrown out of their jobs in Israel, and the area is collapsing economically. “They do not have any stocks. It is really hand to mouth, and every day finds the situation more tense in the camps,” said Karen Koning Abu Zayd of the United Nations Relief and Works Agency for Palestinian Refugees. Israeli forces have destroyed at least 625 acres of palm, olive and citrus groves in Gaza since the beginning of the intifada.

ON A typical day last week Israeli helicopters and gunboats shelled cities in the Gaza Strip throughout Monday night. Yet when young Palestinian demonstrators went out on to the streets to protest on Tuesday the Israeli soldiers attacked them again.

The soldiers targeted the upper bodies of demonstrators, who were aged between 12 and 19 years old. The Israeli soldiers aimed to kill. In Rafah soldiers seriously wounded three Palestinians with live bullets. One of them, 17 year old A’ahed A’adel El-Bayyoumi, was shot in the chest. In the village of Borqin, Israeli troops shot 25 year old Mohammed Lufti Massad through the heart and killed him.

They had already killed his brother, Mahmoud, in October. Mohammed was trying to help a friend who had been shot in the foot by Israeli soldiers.

“MY NEIGHBOURS Um Ra’ed, Ibrahim and Firas come over so I can show them the latest graphic photos of martyrs. They’re dumbfounded by the sight of the ripped open hands, heads and arms, the torn flesh, the visible bones, the bright red blood. I wonder if the people that I care about will still be here in the next days and weeks. I wonder if I will be here too. The first and second graders at school are too terrified to walk home from school. They think the soldiers will shoot them like they shot 12 year old Muayad Jawirish the other day. One of the kids in my class saw him as he laid there on the pavement with his brain spilled out on the street. My husband, his cousin Maher, his wife Marina and I get in the car and drive to Beit Sahour. We were watching a town engulfed in darkness as Israeli Apache choppers fired away. Nothing moved. There was no panic, no screams, no people running away. Mummies, daddies, babies, boys, girls and grannies sat in their homes and endured the shelling. There is no other place to go, and if you’re lucky, you’re not hit, and if you’re unlucky, you’re hit.”

FOUR Palestinians were gunned down in cold blood by Israeli troops as the victims drove in two cars to the Morag settlement on Wednesday of last week. An eyewitness said, “I saw a troop carrier coming from the newly paved settlement road. When the car came near the tanks, Israeli occupation troops started to shoot intensively at it from a distance of some metres.

“The shooting lasted continuously for almost four minutes. When the shooting stopped, three jeeps of Israeli troops came. The troops got out of the jeeps, pulled the bodies from the car and put them in a jeep.” The four dead included bakery workers Abu Laban and El-Leddawi.$ People forced to live under armed siege

On 12 November “a domestic worker at St John’s Eye Hospital and his wife, a nurse, were stopped at a road block on their way from their home in the West Bank to work in East Jerusalem. A soldier told them to go back. When the husband explained he was a hospital worker and had a valid permit for the current situation, the solider hit him on the arm. Three soldiers joined in and they all attacked him.”

The other eyewitness report is from 14 November: “A 35 year old man from the village of Sinjel, near Ramallah, developed chest pains and was taken by ambulance to the entrance of the village, intending to reach Ramallah Hospital. The ambulance was stopped at the entrance by the Israeli Defence Force and was not allowed passage despite the pleas of the medical staff. After an hour and a half he had a cardiac arrest and was taken back into the village to the local medical centre where a doctor unsuccessfully attempted CPR. He died.”

The settlers on offensive

SINCE THE beginning of the peace process in 1993 the number of Israeli settlers in the Occupied Territories has doubled to 200,000. The increase in the number of settlers is part of Israel’s plan to keep control of most of the West Bank and Gaza.

The settlers carry out violent attacks on Palestinians without concern as the Israeli authorities turn a blind eye to them. These attacks have increased over the last few weeks.

On 20 November the Jaber family was attacked by hundreds of settlers who threw stones at the houses, destroyed fields, pulled up plants and pipes, and broke irrigation sprinklers while shouting, “Death to the Arabs!”

In Hebron Israeli settlers attacked the Cortoba Girls’ School, where they beat a number of students. The Israeli military then arrived, and shot gas canisters and live ammunition into the school.

Settlers attacked Palestinians in the al-Hesba vegetable market. The next day the army bulldozed al-Hesba, costing dozens of Palestinian jobs and allowing the settlers to take over the site. On 21 November Israeli settlers shot at Palestinian homes in Huwarra in the Nablus area. The main road into the village was sealed off, and a fuel station and mosque were burned.

Trade unions must lead a national fight to save jobs

Government set targets to drive us off benefits 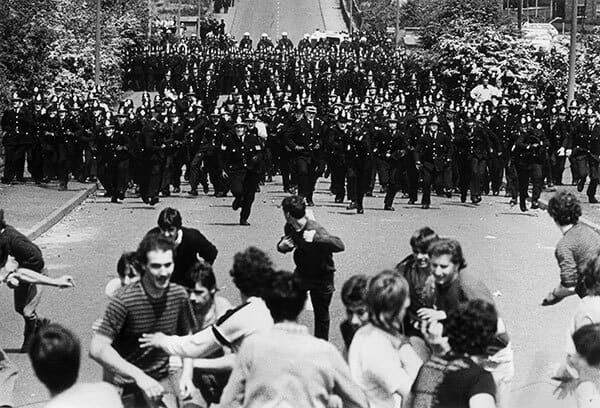