ARIEL SHARON, war criminal and new prime minister of Israel, stepped up the persecution of the Palestinians as his new government took office last week. Sharon, responsible for the slaughter of 2,000 Palestinian refugees in Lebanon in 1982, appointed some of the most right wing figures in Israeli politics to key positions in his cabinet.

HE IS proud to be labelled an “extremist”. He wants to expel the three million Palestinians who live in the Occupied Territories of the West Bank and Gaza Strip. He aims to encourage “emigration” by banning Palestinians from working in Israel, and closing factories and universities in the West Bank.

He also wants to bar Israel’s one million Arabs from voting in elections. And he wants Israel to invade neighbouring Jordan. He has urged Sharon to be even more brutal in putting down the Palestinian uprising, or intifada, saying that the Israeli army should be allowed to unleash attack dogs on demonstrators and bulldoze more Palestinian houses. “We have to find the three or four weak places of the Palestinian Authority and press there, and they will crawl to us asking us to stop it,” Ze’evi says.

Avigdor Lieberman, minister for the infrastructure:

IN THE run-up to the election last month he said that Sharon’s government would attack Iran, Lebanon and Egypt if any of them stepped out of line. He wants the Israeli army to use more force to suppress the Palestinians, and has talked of reoccupying the West Bank and invading the Christian Arab town of Beit Jala.

HE LIVES in one of the many thousands of Israeli settlements that have been built, illegally, in the Occupied Territories. These settlers are responsible for violent attacks on Palestinians and are protected by the Israeli army. They are among Sharon’s most enthusiastic supporters.

HE IS known as “little Sharon” for his brutal role in the 1982 invasion of Lebanon under Sharon’s leadership.

ISRAELI SOLDIERS blockaded a whole area of the West Bank last week. They built a trench to cut off Jericho from the rest of the West Bank, destroying telephone cables and water pipes in the process-the only water supply for 25 villages.

Some 65,000 Palestinians live in the area. There is no hospital, and Israeli soldiers are blocking the delivery of crucial supplies. A mass demonstration on Monday rebelled against the trench-the first big protest for weeks.

End the occupation Support the right to return

“I strongly support this initiative and I hope that as many concerned citizens, students and trade unionists as possible in the UK take part.” Dr Hanan Ashwari, prominent Palestinian politician

Called by the Campaign for Palestinian Rights 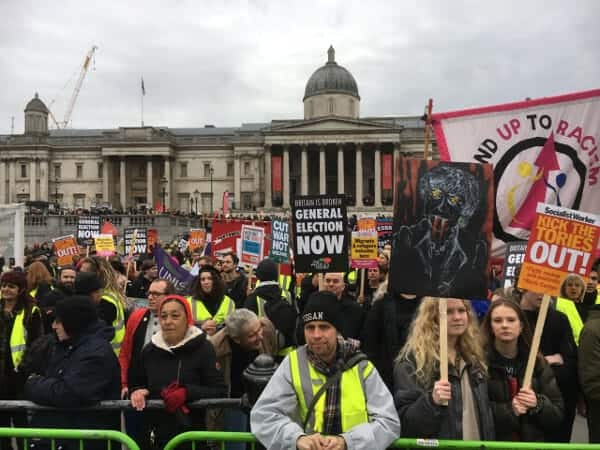 Thousands protest in London to demand a general election