It’s urgent we act now to save our future

This article is over 16 years, 11 months old
THE GOVERNMENT wants to implement its plans for the local government pension scheme this year. If it gets away with that, it will be harder for us to resist other attacks.
Downloading PDF. Please wait...
Saturday 19 February 2005

THE GOVERNMENT wants to implement its plans for the local government pension scheme this year. If it gets away with that, it will be harder for us to resist other attacks.

This plan would have a devastating impact on local government where it would almost certainly cause a crisis in the recruitment and retention of staff.

One of the messages we have to get out is that we are not protecting gold-plated pensions—the average local government pension is only £3,800.

At Unison women’s conference last week many speakers emphasised that women already suffer particularly hard because many have time out of work for childcare and are more likely to work part-time.

More and more people say that we have been trodden on for years and that enough is enough.

The strength of feeling about the pensions issue is probably even more than over our pay campaign three years ago.

That led to nearly one million workers on strike. Right across the workforce there is an eagerness to take whatever action is needed to stop the plans to make us work five years longer.

Activists need to turn out a good yes vote in every union where there are ballots—united public sector action is where we will be strongest.

We also need to raise the arguments about how we can put on enough pressure to make New Labour back down. Wednesday 23 March must be a solid day of action, but many of us know already that a one-day strike may need to be followed by escalating action.

There will be different views about what type of further action we should take, but we should be the putting the case for escalation now. We should be determined to go ahead with action even if Labour begins to negotiate with our union leaders.

I don’t want to see any action suspended during negotiations. This happened during our dispute in 2002 and we lost momentum.

We should make clear that we can’t be bought off with a temporary reprieve. A postponement of worsening our pension rights is not enough.

I worry that some union leaders may try to quash the emerging fight because of the election.

Yet these months before the election are precisely the time to rock the boat—Labour needs union support to win and we can use that to our advantage.

The credibility of the link between the unions and the Labour Party is being stretched. How can union leaders ask activists to persuade members to vote Labour when they are being attacked in this way?
Patricia Rowe, special educational needs worker and United Left candidate for Unison national executive south west region female seat, personal capacity 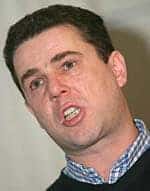