The strategy of tension

SOME OF the events witnessed in Genoa two weeks ago uncannily resemble what happened in Italy 30 years ago. What became known as the “strategy of tension” began in December 1969 when a bomb exploded without warning in Milan, killing 16 and wounding 90. It was the beginning of an attempt to criminalise and repress a growing mass movement.

The “strategy of tension” was a plot between fascist terror groups and government secret services. Bombs would be planted, people would be murdered, and the media would blame Communists or anarchists.

The random nature of the bombings-in banks, railway stations and public squares-created extreme tension. Ultimately the hope was that people would demand a “strong state” to clamp down, something akin to fascism. The timing wasn’t accidental.

The day before the bomb went off in Milan a historic Labour Charter was signed between the government and trade unions, in which the 40-hour week was introduced for the first time. Equal pay rises for all workers were also granted, and unions were given the right to organise mass workplace meetings at the bosses’ expense. Two weeks before that a law legalising divorce was passed, and on the same day 100,000 engineers marched in Rome.

A mass movement had begun in universities across Italy in 1967-8. One of the main reasons for student unrest was overcrowding. The total number of university students in Italy had risen from 268,000 in 1960 to over 450,000 in 1968, yet very few new buildings were built. Some lecturers gained their positions under fascism and made no secret of their fascist views.

World events also played a vital role in radicalising students. The Russian invasion of Czechoslovakia in 1968 led many young people to reject the “Communism” of the Soviet Union together with the Italian Communist Party.

Just as young people today look to the Zapatistas in Mexico for inspiration, in 1968 young people looked to Che Guevara or the Chinese leader Mao Zedong. The rebellion of blacks in the US opened many people’s eyes to the reality of the American Dream, which quickly fed in to a massive campaign against the Vietnam War.

There was an explosion of reading and discussion. Just as today, a new generation was discussing what kind of world it wanted. During 1968 student-based organisations which called themselves Marxist and revolutionary were created. And, crucially, some of them started talking systematically to workers.

These groups had a vital influence on the explosion of workers’ struggles in the second half of 1969-the “Hot Autumn”. Strikes multiplied fourfold during 1968-9, often involving non-manual workers. But the key revolts were centred in the factories, and by the autumn of 1969 many bosses had lost control. Decisions on what action to take were generally made at mass meetings, which were often called spontaneously.

One FIAT worker recalled, “People just jumped on the tables in the cafeteria during lunch break, and that’s how mass meetings started.” In the most militant factories managers became targets: “Hunting for the bosses soon became a habit. Sometimes we caught them and threw them out over the gates, other times we roped them up, stuck a red flag in their hands, and forced them to march along in front of the rally.”

The Milan bombing in 1969 was an attempt to stop all this. Just an hour after the explosion police began arresting anarchists. One of those picked up was Giuseppe Pinelli.

Some 72 hours later he “jumped” from the fourth floor room where he was being questioned-despite the fact that he was with five police officers. The attempt to cover up his murder was the subject of Dario Fo’s play Accidental Death of an Anarchist.

The aim of the strategy of tension was to boost the right in the hope that people would demand a clampdown. Initially the far right did gain ground. The fascist MSI’s vote doubled from 4.4 percent in 1968 to 8.7 percent in 1972. Yet throughout the first half of the 1970s the left continued to hold its ground, calling large demonstrations, and exposing the lies of the media and the state. But some minor left groups proved to be a liability.

Small anarchist groups were occasionally infiltrated by neo-fascists and the secret services who tried to persuade, bribe or blackmail them into carrying out their own acts of low-level terrorism. Initially the confidence of the mass movement could successfully deal with these provocations through strength of numbers. But by the second half of the 1970s the confidence of the movement was starting to wane.

Workers’ strike action was declining, student activism was a shadow of its former self, and the revolutionary groups which arose after 1968 had disbanded.

Things got even worse with tolerance of “P38 comrades”-demonstrators who would dart out of the march to take a pot-shot at police lines with P38 pistols. Now demonstrations often didn’t end with speeches but with gunshots. Then suddenly there were no demonstrations at all. People didn’t want to come to demos thinking they would end in shoot-outs.

THIRTY YEARS later many of the same issues have resurfaced. On Monday 16 July a policeman opened a package in Genoa which exploded and seriously damaged his eye. Bomb threats suddenly spread.

Dario Fo, now 75, sensed that a new strategy of tension was about to unfold. He wrote an article entitled “Beware of the State’s Anarchists” on the eve of the three big demonstrations in Genoa: “What we are witnessing is an incredible repetition of what happened back then. In the face of the growth of a deeply peaceful world protest movement, the system replies by trying to drag it into a spiral of violence. Therefore we get bombs, and people look for excuses to beat up and arrest demonstrators, hoping that some young people will engage in violent confrontations. And to make sure that this happens, you can bet your bottom dollar that agents provocateurs are already at work.”

There is now overwhelming evidence that the Black Block was given free rein to do anything it wanted in Genoa. Police and fascist agents also infiltrated it. Yet the response of recent days leaves ground for optimism. In the immediate aftermath of the Genoa demonstrations there were two forms of protests in Italy. One form was bomb threats, letter bombs, vandalism and death threats.

The other was mass demonstrations and strikes. Over 50 protests were organised within 48 hours of the raid on the Genoa Social Forum’s headquarters, many of them initiated by local trade unions. And at the Stefana steelworks in Brescia, workers went on strike against “the ferocious violence of the police”, and demanded the release of one of their shop stewards who had been arrested.

In Genoa the Italian state threw everything it had at anti-capitalist demonstrators and ultimately lost. Despite its “strategy of tension”, and the murder of protester Carlo Giuliani, the movement came out of it more united, mature and determined.

While you get poorer, these billionaires get even richer 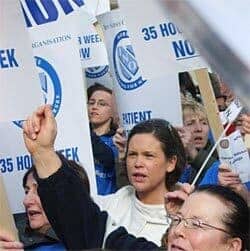