Tory health secretary Jeremy Hunt has announced that he will impose a dangerous new contract on junior doctors.

He said that a proposed deal rejected by the British Medical Association (BMA) last night was the “best and final offer”.

Hunt told the House of Commons that the government’s chief negotiator advised him “that a negotiated solution is not realistically possible”. “He has asked me to end the uncertainty for the service by proceeding with the introduction of a new contract—I have today decided to do that today,” he said.

The new contract, which rips apart terms and conditions and puts patient safety at risk, would come in on 1 August.

“The BMA was absolutely right to reject it.”

Johann Malawana, chair of the BMA’s junior doctor committee, said, “This is clearly a political fight for the government rather than an attempt to come to a reasonable solution for all junior doctors.

“Our message to the government is clear. Junior doctors cannot and will not accept a contract that is bad for the future of patient care, the profession and the NHS as a whole, and we will consider all options open to us.” 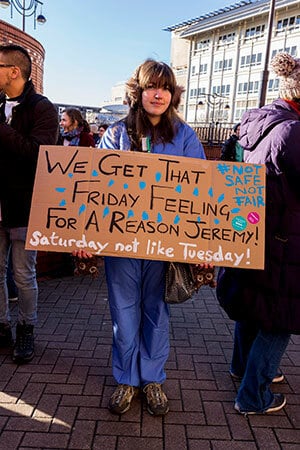 A junior doctor on the picket line in Leeds yesterday (Pic: Neil Terry)

Hunt’s announcement comes the day after the BMA’s second 24-hour walkout and in the middle of the TUC’s week of action against the Trade Union Bill. It is a threat to the whole trade union movement and everyone fighting austerity.

He said, “This attack is not just about junior doctors—it’s about all health workers and those in the public sector.

“The government is trying push through cuts across the welfare state and the NHS is the jewel in the crown.”

Rory added, “If junior doctors lose, it’s the whole of the NHS that’s at stake”

Many junior doctors were unsure about how to respond to the threat of imposition on the picket lines yesterday. They discussed possible “mass resignations” or “leaving the profession”.

Tory attacks are driving health workers out of the NHS—but a united fight can push them back.

Rory said, “We need to encourage as many junior doctors as possible not to sign the new contract and keep fighting.”

“All trade unions should fight together—and walk out together.”

The walkout yesterday showed that NHS strikes are popular and can act as a focus of resistance to austerity.

John said, “The support is there—we had postal workers, firefighters, tube and local government workers rallying in solidarity with yesterday’s strike in our area.

“This is a key fight for the whole trade union movement. We must get behind the junior doctors in resisting this imposition.

Hunt cannot afford to compromise—a win for the junior doctors would boost other groups of workers under attack.

Rory said, “Junior doctors should stay strong and keep fighting—we will not have this contract imposed on us.” 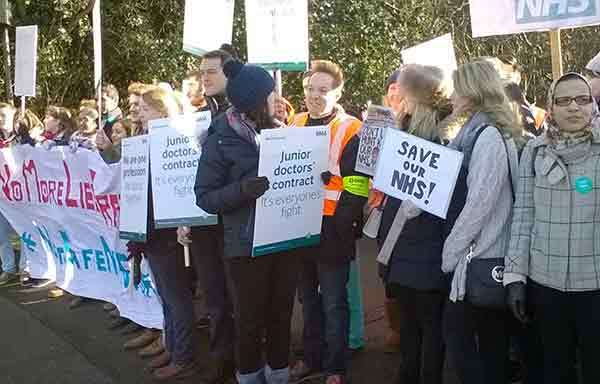