Join protest at court to demand justice for Martin Smith

Veteran anti-fascist campaigner Martin Smith is to appear in court on Tuesday 7 September.

He is charged with assaulting a police officer during the demonstration against Nazi British National Party leader Nick Griffin’s appearance on the BBC’s Question Time programme last year.

It is a charge Martin vehemently denies.

Unite Against Fascism (UAF) is calling on supporters to protest in support of Martin outside South Western Magistrates’ Court in south London.

Martin is a national officer of UAF and the national coordinator of Love Music Hate Racism. He is also the national organiser of the Socialist Workers Party.

Over 1,000 people joined the UAF demo against Nick Griffin on the 22 October last year.

The demonstration was backed by the Unite, PCS, CWU, Bectu, Aslef and TSSA trade unions, the Musicians Union and the South East Regional TUC.

But the police have systematically targeted anti-fascist campaigners on UAF protests.

A number of activists have been arrested and still face charges following a protest against the English Defence League (EDL) in Bolton earlier this year.

Weyman Bennett, joint chair of UAF, says that Martin’s case is significant for every anti-fascist protester.

“Martin is innocent of these charges. Our right to protest is on trial,” he told Socialist Worker. “Everybody who stands up and opposes the fascists deserves our support.”

He told Socialist Worker, “I have known Martin for 27 years. He is a committed and principled campaigner against racism and fascism.

“The charge against Martin has everything to do with trying to curb the right to protest and intimidate those who are trying to combat the BNP and the racist EDL.

“I would urge all those who can to join the protest in support of Martin on 7 ­September.”

•Join the protest against the racist English Defence League in Bradford on Saturday 28 August.

•UAF and the Muslim Association of Britain have called a national demonstration, “No to racism, No to Islamophobia”, on 6 November in central London.

Connecting the activists across European unions 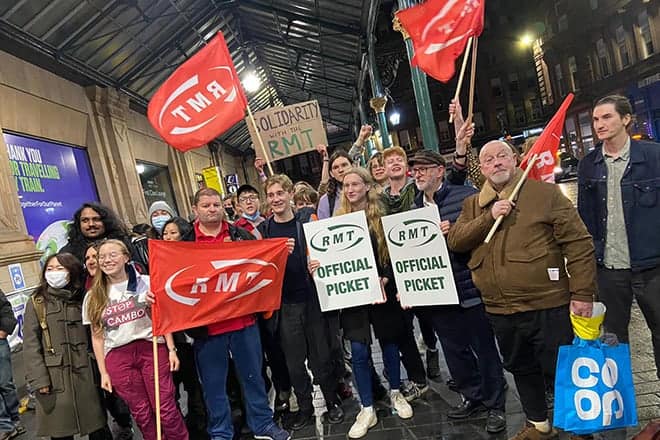