Join the fight for the NHS

The size of the protest showed the huge anger that exists over the Tories’ attacks on the NHS—and that health campaigns can mobilise people.

Health secretary Jeremy Hunt is due to decide whether to back the proposals this month.

Consultant paediatrician Dr Dorothy Garvie spelled out the dangers if the cuts go through.

“If they close the children’s A&E the specialist services will really suffer,” she said.

“There won’t be proper provision for long term chronic conditions. Matthew Kershaw didn’t even know we have a children’s A&E because he didn’t ask questions.”

Holly Platt held a placard reading, “I have anaphylactic allergies. Who will save me without an A&E?”

Marchers rallied in Mountsfield Park with bands and the Olympic drummers.

South African anti-racist leader Desmond Tutu, who lived in the area for a long time, sent a message of support as did local football club Millwall.

The march was the second demonstration in the campaign against the proposed closures. People applauded protesters along their route while drivers in cars, lorries and buses honked their support.

Signs supporting the campaign were in the windows of houses and shops across Lewisham—and all over lampposts and fences.

There is enormous support for action to defend the health service. In Yorkshire this week striking health workers won widespread solidarity.

People aren’t falling for the Tory lies over the cuts.

One health worker said, “We keep being told that other services across London will take the strain, but it’s not true.

“There’s no slack to take up. Since Christmas the nearest hospitals have repeatedly been full. Ambulances have had to divert people to Lewisham.”

Local MP Heidi Alexander spoke for the Labour MPs and mayor in the area covered by Lewisham NHS.

She said, “Between April 2011-12 Woolwich, Queen Elizabeth and Kings hospitals had to close their A&Es 37 times when they were full and send patients to Lewisham.

“The proposals are not about saving lives or improving care.”

Conroy Lawrence from the Unison union at the hospital agreed. He said the closure plan was “putting profit and Tory ideology before patients”.

“We have to send Jeremy Hunt the message that downgrading the service is not an option,” he added. “It’s our hospital, not theirs.”

For information on NHS campaigns go to www.keepourNHSpublic.com 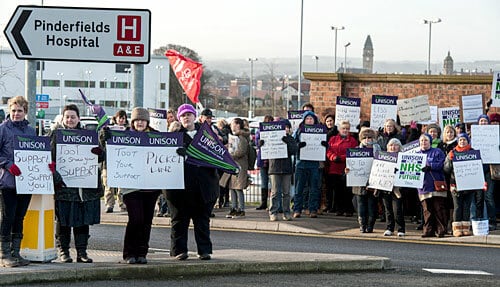 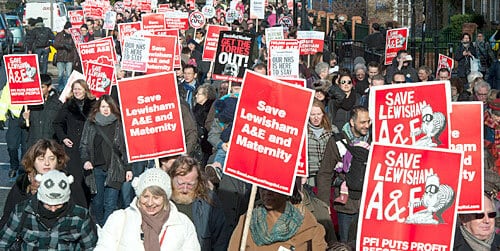