Join the protest to stop the Nazi BNP

This article is over 16 years, 3 months old
Anti-fascist campaigners from across the country are mobilising for a demonstration to stop a planned protest by the Nazi British National Party (BNP) in Leeds on Wednesday 2 November.
By Anindya Bhattacharyya
Downloading PDF. Please wait...
Saturday 15 October 2005

Anti-fascist campaigners from across the country are mobilising for a demonstration to stop a planned protest by the Nazi British National Party (BNP) in Leeds on Wednesday 2 November.

The demonstration, organised by Yorkshire and the Humber TUC and Unite Against Fascism, will coincide with a court appearance by BNP leader Nick Griffin on charges of inciting racial hatred.

Griffin was arrested and charged in July last year after revelations from The Secret Agent, a BBC documentary where an undercover journalist infiltrated the BNP and filmed Griffin and other senior BNP figures whipping up race hatred.

Previous court appearances by Griffin have been accompanied by small demonstrations of BNP members. Unite campaigners hope the Nazis will be comprehensively outnumbered by anti-fascists on 2 November.

“It’s up to us to halt the rise of the far right by uniting all sections of the community — and by standing together to defend those who are the targets of the far right,” said Weyman Bennett, joint secretary of Unite.

“The vast majority of people oppose the fascists and don’t want to see them gain in strength. We need to combine all the political currents committed to opposing the BNP into a unified and vibrant voice of protest.”

“That’s why it’s important that people mobilise for the 2 November demonstration — and for Unite Against Fascism’s national conference in London on Saturday 5 November.”

The demonstration has received backing from wide sections of the labour movement. The north west region of the PCS civil service workers’ union is sending coaches to the protest.

“This is a very important protest for us in the north west as the BNP is trying to make gains here,” Dave Owens, a member of the PCS’s north west regional committee, told Socialist Worker.

“Our union has been very active against the BNP, and we want union members to go to Leeds on 2 November to protest against the fascists.”

Anti-fascist activists believe the Nazis are deliberately trying to raise their profile on the streets in order to gear up for next year’s council elections in May.

These elections will decide many council seats in England and Wales — in most wards this means the Nazis need only to come third to grab a council seat.

The BNP plans to target areas it did relatively well in during this year’s general election, particularly Keighley in West Yorkshire — where Griffin stood and polled 9.2 percent — and Barking & Dagenham in east London.

As well as the 2 November outing in Leeds, the BNP has called a “national demonstration” in Keighley on 5 November — though local people are trying to get this event banned.

Whether or not the BNP Bonfire Night demonstration goes ahead, the very fact that it has called it in Keighley shows how an atmosphere of racism acts to boost the confidence and strength of the Nazis.

The Yorkshire town has been dogged by lurid allegations of an “Asian paedophile ring” involved in “grooming” young white girls. The BNP has seized on these claims to whip up racism in an already divided town.

This situation isn’t helped by the approach taken by local anti-fascist campaigners, who have refused to work with Unite.

Ann Cryer, Labour MP for Keighley, insisted on “addressing the grooming issue” rather than confronting the racism that had made it an “issue” in the first place. She recently wrote in the Tribune magazine that “only a handful” of BNP voters were racists.

This approach has been severely criticised by, among others, Ken Livingstone, mayor of London and chair of Unite Against Fascism.

He recently wrote, “In Keighley and Bradford… credence was given to the BNP’s racist myths and the local Asian community were not central to the [anti-fascist] campaign. The BNP now has four local councillors and won nearly 10 percent of the vote at the general election.

“Our contention is very simple. Where the anti-fascist campaign, in which the trade unions must play a central role, takes on racism and allies with those targeted by the fascists… it has pushed back the BNP.

“Where it has failed to fight racism, or made concessions to it, and failed to centrally involve the communities targeted by the fascists, it has been less effective or has failed.”

Weyman Bennett notes that any kind of organised campaign against the BNP can help hold back their vote in the short term, given that the majority of the population are anti-fascist.

But he argues that to effectively crush the Nazis “you need to mobilise in a way that undermines racism”.

This means ensuring that ethnic minorities are prominently involved in the anti-fascist campaign, and that racist arguments are challenged.

Weyman Bennett says, “If you give concessions to racism, the BNP gains a legitimacy — and that means that when you do push them aside, they pop right back.

“That was the problem in Keighley, and now we’re seeing the results. Where else are the BNP planning something like this?”

Peace and Unity in our communties — Don’t Let the BNP divide us. 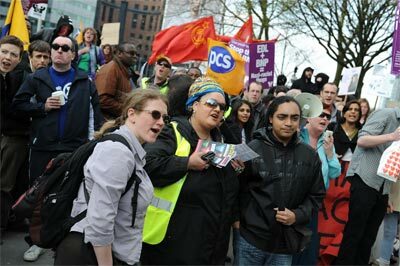 The rot goes deeper than one policeman 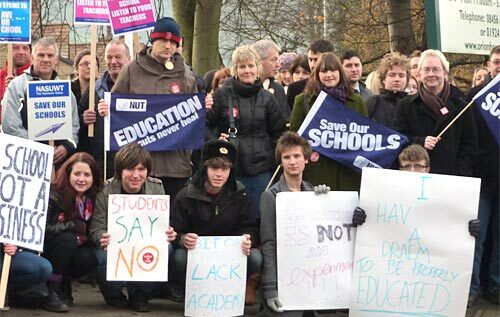