More than 800 junior doctors marched in Manchester on Tuesday of last week to chants of “Tories out” and “strike, strike, strike”.

It followed a 3,000-strong demonstration in London the previous day, which saw junior doctors march on Downing Street and block Whitehall.

The contracts would slash pay by up to 40 percent, rip apart terms and conditions and put patient safety at risk.

Rory Hicks, a junior doctor in Oldham near Manchester, was on the protest.

He told Socialist Worker, “We’re at breaking point already. These further attacks have made us furious because we know the NHS will crumble if they go through.”

“I fear for the future of the NHS unless we fight for it”.

Around 100 people joined a feeder march organised by junior doctors from Manchester Royal Infirmary to the TUC demo last Sunday.

A second protest has been called in central London for 17 October.

Junior doctors and other health workers are building for it in hospitals, medical schools and workplaces.

In the East Midlands a solidarity protest has been called in Nottingham for the same day. 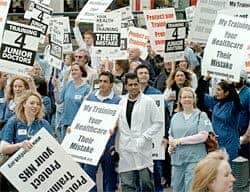