This article is over 19 years, 3 months old
\"NOT GUILTY.\" That was the jury's unanimous verdict on 12 charges against Asians who defended their community in Burnley from racist attack. The jury in Preston Crown Court last week sided with the Asians who on 24 June last year mobilised to stop gangs inspired by the Nazi British National Party terrorising the area.
By Helen Shooter
Downloading PDF. Please wait...
Saturday 19 October 2002

‘NOT GUILTY.’ That was the jury’s unanimous verdict on 12 charges against Asians who defended their community in Burnley from racist attack. The jury in Preston Crown Court last week sided with the Asians who on 24 June last year mobilised to stop gangs inspired by the Nazi British National Party terrorising the area.

Unfortunately the jury, under pressure, did find three of the defendants guilty of ‘violent disorder’ over one incident. But in throwing out the police case on 12 charges the jury sided with the victims – the Asians who were beaten up and whose homes and businesses were torched by racists in Burnley.

In doing so they also rubbished home secretary David Blunkett’s claim that Asians acted like ‘maniacs’ when they confronted racist mobs in Oldham and Bradford last year. Blunkett supported the severe sentences handed out to Asians in Oldham and Bradford, and argued they should stop ‘whining’. Mohammed Nawaz was one of the Burnley defendants cleared last week of the charges against him.

He told Socialist Worker, ‘What happened that day was out of order from the white racists. It was our right to defend ourselves. The jury realised that we did what was necessary. It was horrible being on trial, terrible. I have never been through that experience before and I was scared. It made me think perhaps I should have taken the chance to plead guilty and maybe then I could have been bound over. But when I was cross-examined I said we were proud of the Asian boys who gathered on that day because they stood their ground. If it happened again I know they would do the same. My friends and family are over the moon at my acquittal. They knew what it was like on that day. The prosecution tried to say the white men were just a bunch of drunken yobs. But we have seen drunken yobs before. We knew there was something serious behind it this time and we proved that.’

Hossein from the defence team explained, ‘The jury understood there was a serious and imminent threat to the Asian community. They felt the Asians were justified in organising themselves to protect the area. What happened that day had nothing to do with communities not being able to get along with each other. It was about a minority of organised white racists looking to attack Asians. They started in the main Asian area and the Asian community, not the police, prevented them from coming in. The racists went on to attack isolated Asians away from this area who did not have the numbers to protect themselves. The idea they were maniacs is just nonsense. The problem was the Nazis and the police’s failure to control them.’

Hossein felt the defendants’ determined argument that they could not let the racists go unchallenged helped win over the jury. ‘The lads giving evidence were really impressive. One of the defendants, Mohammed Maroof Bashir, said yes, that’s me on the CCTV. I was looking to protect the area. I did what I did and I would do it again. The prosecution lawyer Mr Pickup didn’t land a punch on them. I’m very proud of them.’ Unfortunately, the jury found three of the defendants guilty over an incident involving police officers and a group of Asians.

The Asians thought the police were protecting a white gang behind a known racist pub in the area. This charge of violent disorder was also tied to a further charge of carrying offensive weapons.

It means on 4 November the defendants, including a 17 year old, could be handed sentences of several years. This is a serious blow to the defendants and their families. But it takes nothing away from the brave stand they took in court. They fought for – and won – the right to self defence against racists.

Just who should be in the dock?

THE POLICE should be in the dock for their actions in Burnley last June. They failed to protect local Asian families from the Nazis and then tried to shift the blame for the events of that day onto the victims. The police escorted the racist mob past Asian areas.

Local people were in constant fear of what these racists would do. Video footage in the trial showed the racists breaking into Asian businesses and homes and setting fire to them. The police could not stop them all night. Senior officers revealed in court that they did not know how many police they had in the area on that night. The figures ranged from 21 police constables to 75-80 officers. They then tried to argue in court that the Asians were a threat.

Chief Superintendent John Knowles even argued the police had prevented a ‘bloodbath’ because they kept apart the racist mob and the Asians. Judge Boulton last week praised those police. He announced in court on Thursday last week that officers would be receiving a police commendation for bravery that he wholeheartedly supported.

One observer at the trial said, ‘He commended the police for their bravery in front of the jury. We were really shocked. I was so angry I just wanted to get up and walk out when I heard that.’ Shahid Malik, a member of Labour’s national executive, spoke in court in support of the Asian defendants.

He is now calling for an independent review into the police actions before, during and after that day. ‘The verdicts clearly signal that the police version of events was not accepted by the jury,’ he said.

‘We’ve made the racists think twice about attacking us’

SHANAZ HUSSAIN is the sister of defendant Tariq Saddique, who was found guilty over the single incident with the police. She told Socialist Worker:

‘The verdict last week was very important for us. The jury threw the prosecution’s case out of the window. The prosecution said we exaggerated the events and that we were not under siege. They said there was no hatred and no racists. On these points it was a victory for us. It also means something to the other men who are due in court on 24 October.

They are charged with the same sentence that Mohammed Nawaz was acquitted of. Some of them were in court last week and said they wished they hadn’t felt under pressure to say they were guilty.

I am upset that Tariq and the others had a guilty charge against them. I feel the jury thought they had to charge them with something because of the sentences given to the white youths for that day.

The judge indicated he would not sentence on the high side for this charge. But it is still possible Tariq could get two and a half to three years. We want to campaign so Tariq does not have a long sentence. We are putting together a profile of Tariq. His work says they are backing him and will write a letter in support of him.

People round the area, white and Asian, say they will give in letters. We are going to be there on 4 November when the men get sentenced and want as many others as possible to come.

All parts of the community came down to the court during the trial. There have been people with trade union banners, socialists, white people and Asians. We want that on a larger scale. We made a point during that trial. The racists will think twice about coming into the area. They will think these people are not just going to sit back and take it.’ 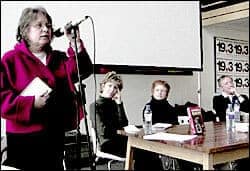 An alternative vision for education in Britain 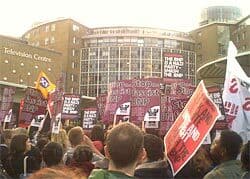 It's good to walk