Just who do Met think they are?

Just who do Met think they are?

WHO DID the Metropolitan Police stop on suspicion that he was responsible for a street robbery just after Christmas? None other than Neville Lawrence, father of murdered teenager Stephen.

The news broke just before the publication of a damning report into policing in London commissioned by home secretary Jack Straw. It found that widespread racism still exists in the Met and that the force has a low clear-up rate for murder.

Neville Lawrence was stopped with his cousin in a car on 27 December in west London. He was questioned for 20 minutes. Did the police really believe him guilty of a robbery? Or were the officers just about the only people in the country not to recognise Neville? The officers clearly did not realise that the car Neville was in was supplied by the Metropolitan Police to help protect him from Nazis who have threatened his life!

If the police can put someone as well known as Neville through a 20 minute grilling, it says a lot about how they treat black people in general. Black people across Britain are on average six times more likely to be stopped by the police than white people.

The incident involving Neville recalls evidence given to the Lawrence inquiry by the Black Police Association. In April 1998, after a crime committed in north London, a detective chief inspector put out a message across the whole of the Met. The officer ordered that “all vehicles containing IC3 [black] males should be approached with caution.” In other words every black driver in London became a serious crime suspect in the Met’s eyes.

The report by Her Majesty’s Inspectorate says there are still problems with the police’s investigations into crimes that are racist. It says there is a “pervasive feeling” in the ranks of the police that victims of racist attacks get “special treatment”. This attitude goes right to the top.

Sir Paul Condon, retiring Metropolitan Police Commissioner, was interviewed in the Daily Telegraph last week. He described the police officers in the Lawrence case as “unwitting victims” of last year’s inquiry. He talked of one officer’s “unjustly hostile treatment at the hands of the inquiry”.

The case of black north Londoner Roger Sylvester, who died in police custody in January 1999, shows how little has changed. It has taken a whole year for Essex police to compile a report for the Police Complaints Authority into Roger’s death. It is due to be released shortly. But the family have no idea what it will say and may never be allowed to see a full version.

Straw should be condemning the police’s racism. But instead he is using Stephen’s murder to justify his attacks on the right to trial by jury. He says miscarriages of justice in the 1970s and 1980s were about those who were wrongly imprisoned like the Birmingham Six and the Guildford Four.

In the 1990s, says Straw, “the issue was not someone who was innocent and found guilty but the opposite failing: the system’s failure to secure a conviction.” But cutting back on jury trials, as Straw proposes, will only make it easier to convict those who are not guilty of anything. And it will do nothing to tackle police racism.

Police racism is a harsh reality beyond London

NO ONE should believe that problems of police racism are confined to London.

Get out Blair... and take your fees with you 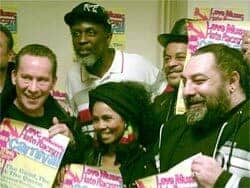 UB40 and Steel Pulse at anti-'Rivers of Blood' press conference