Justice for the McGowans

Justice for the McGowans

A COACHLOAD of supporters from Telford travelled down to London on Wednesday of last week to support the family of Errol and Jason McGowan. The McGowans were in London to protest at West Mercia Police’s failure to investigate the deaths of Errol and Jason, who were both found hanged in Telford after suffering racist harassment. The McGowans and their supporters gathered outside New Scotland Yard (above). The family are asking the yard’s Racial and Violent Crimes Task Force to take over the investigation.

The family and their lawyers then met home secretary Jack Straw at Parliament. Deborah Todd, campaign coordinator in Telford, says, “We followed up on Friday by picketing Telford’s police station.”

Around 170 people came to a forum on British justice organised by Bradford Against Injustice. They heard local speakers, lawyer Imran Khan, Janet Alder and others. 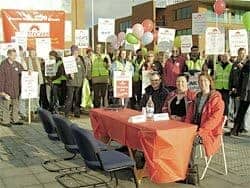