Keeping profit out of schools

Keeping profit out of schools

WALTHAM Forest council recently called a public meeting for parents, teachers and local people. It was supposed to “inform” us of their plans to privatise education in the borough. Two hundred people packed into the meeting.

To the surprise of the Labour deputy leader and the chief education officer it turned out to be one of the angriest meetings held in the borough for years. Parents and teachers got up one after another to vent their fury at the sell-off of their schools to the privateers.

One of the three companies shortlisted, NordAnglia, has already slashed special needs provision in Hackney education department, and has been found guilty of racial discrimination. Another company involved in one of the bids is Group 4. No problem with disruptive pupils, then!

Our schools are already desperately short of resources. At Sam’s kids’ school parents have already been asked for donations to pay for school books. If private firms take over and rake off even more funds for their own profit then the position for kids, parents and teachers will be disastrous. The meeting voted unanimously against privatisation of our schools and in favour of a better funded, publicly accountable education system.

Action groups have been set up around the borough and, with the support of the council union UNISON, have called for a demonstration and lobby of the next full council meeting.

Put socialism on the agenda

IT WAS good to read the report of the recent massive protest meeting against privatisation in Bradford. It is a pity that your report refers to Bradford’s “Labour-controlled council”. In fact no party has overall control, and the Liberal Democrats are in an unacknowledged partnership with the Tories. Not that there are any excuses for Bradford’s Labour group. The privatisation rot set in under Labour control with their moves to privatise education under pressure from the Labour government. That is one reason why many people in Bradford will hopefully now get involved in the setting up of a Socialist Alliance organisation in the city to put socialism back on the agenda.

I WORK for Johnson Controls. We make all the seats for the cars at Ford Dagenham, so when Ford closes we will close. In the summer redundancies shut down one whole shift. Now Ford says it is cutting down car production to 300 a day. We are now having to face more redundancies.

Ford workers are working six days a week so we have to work six days a week. I have a family and I see them one day a week. I have been with Johnson’s for two years and I am being laid off five days before Christmas. On 15 December Johnson’s will give cheques to the people it has made redundant and tell us not to come back. There is a whole plant closing down in Mansfield, and people are being laid off at other plants.

THE QUEEN’S Speech last week made no mention of any plans to repeal Thatcher’s Section 28. This means that four years into a Labour government a law that enshrines homophobia in schools and local councils is still on the statute books in England and Wales.

Not only have Labour capitulated to the bigoted and unelected House of Lords, but the only alternative they have offered is bolstering of the heterosexual nuclear family. The Home Office plans to release a book, in conjunction with the Church of England, on how to keep your marriage going. Marriage is deemed to be the best way to live.

The implications of this are that couples should stay together no matter how unhappy they are, and that anyone who falls outside of this ideal should be in some way stigmatised. When the likes of bus baron Brian Souter and Cardinal Winning have filled the billboards of Scotland with homophobic posters, the response of New Labour is not just irresponsible but downright disgusting.

ALL THE various rail companies that acquired franchises when privatisation took place undertook to run a safe and efficient system. However, soon after the Hatfield disaster they admitted hundreds of miles of track were in fact unsafe. They claimed the situation could only be rectified if the government provided extra funds. Obligingly, Mr Prescott supplied more money.

When the miners were judged to have broken the law the government sequestrated the funds of the miners’ union, the NUM. Railtrack and the other robbers should be stripped of their assets. Only then can we be assured they will do no further damage.

IN REFERENCE to Dave White’s letter in Socialist Worker (2 December), hip-hop is, when genuine, about a voice from the street saying what the hell it wants in a society which denies hope to the oppressed.

This has been particularly acute for black youth in the US. Hip-hop can be “entertainment”, but it is created by people struggling to define their own lives with the means of expression available to them. The results can be negative and positive. Many rappers are keen to get an often radical message across. Chuck D, Ice T and KRS-1 all do speaking tours.

KRS-1 says, “The true revolution will unite humanity, not black or white or Asian or Indian. All races.”

Non-violence must be tried MATTHEW COOKSON’S article “Gandhi And The Non-Violent Way” (2 December) was thought-provoking and interesting. He rightly points out the flaws in Gandhi’s brave and vital struggle against imperialism in India. There is a danger, however, that the article could be seen as dismissing non-violent protest in favour of violent action.

As socialists we recognise the innate value of every human being, so we must recognise that any action that harms the life of another person, even a bourgeois or imperialist person, compromises our position. We only have to look to Russia and the later Stalinist regimes to see that those who gain power using terror rule using terror.

There will of course be times when drastic measures must be taken for the greater good. This can only ever be acceptable when all non-violent tactics that do not result in compromise have failed.

System is to blame

TO CONTINUE the discussion about race in education the question we have to answer is, how can education be “institutionally racist” without teachers being to blame? The answer lies in what the government tells teachers they have to teach, and how they are supposed to teach it. We have to identify the ways in which (1) the curriculum itself excludes the lives, ideas and history of most cultures other than that of the white English middle class, and (2) how the very method of education in place ignores the day to day experience of children of working class and minority culture backgrounds. The horrific figures of exclusions from Peckham schools are evidence of this.

YOUR SLOGANS on the demonstration at the European Union summit in Nice last week were a great success. Many demonstrators took up the chants, and placards saying “Resist! Revolt! F**k capitalism. Join the resistance”. Bravo. Revolutionary greetings.

AT THE summit conference in Nice a closer look ought to be taken at capitalism itself. For more than 100 years public welfare has struggled to remedy the many ill side effects of the industrial revolution. Free enterprise has invaded areas of public administration, including the welfare state. There is now a dogmatic assertion of capitalism as the only economic order. 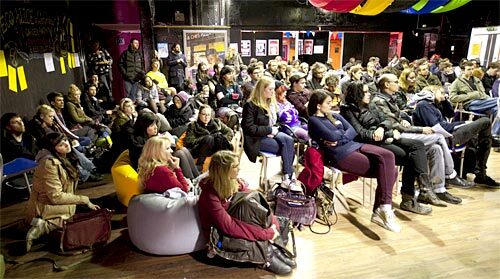 Students talking about a revolution