Keir Starmer’s speech to Labour’s conference was a bid to prove to the media, the bosses and Labour MPs that they should let him stay on as leader.

His first conference as Labour leader was full of speculation about who would follow him. Right wing MPs, and even sympathetic media backers, are frustrated that his lurch to the right has failed to make Labour popular.

That’s why Starmer used the conference to orchestrate a landmark defeat for the left. By increasing MPs’ power, he made it much harder for them to ever stand another leadership candidate.

And he began his speech with a passage designed to show he had broken decisively with the left wing politics of Jeremy Corbyn.

“To the voters that thought we were unpatriotic or irresponsible, or that we looked down on them, I say these simple but powerful words,” he said. “We will never under my leadership go into an election with a manifesto that is not a serious plan for government.

“That’s why it has been so important to get our own house in order this week and we have done that.”

Starmer outright rejected the radical promises of spending on new public services or state ownership that bosses and the media had branded unrealistic.

“There will be no promises we can’t keep or commitments we can’t pay for,” he said. “Too often in the history of this party our dream of the good society falls foul of the belief that we will not run a strong economy.”

Most symbolically of all, he praised the governments of Tony Blair and Gordon Brown—to huge cheers and a standing ovation from right wing members in the room.

There was support for the cops, the military and British nationalism. 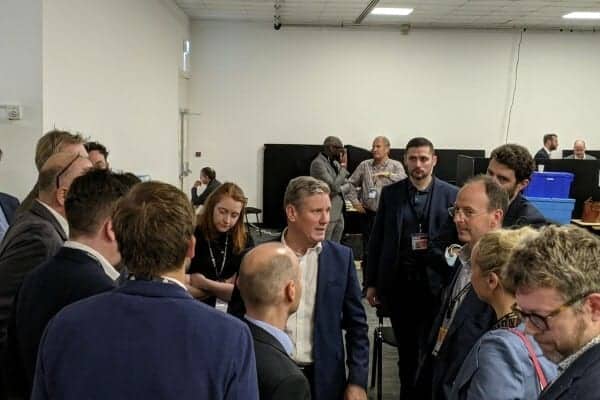 Starmer celebrates as left is sidelined at conference
Read More

Starmer was introduced by Doreen Lawrence, the mother of murdered black teenager Stephen Lawrence. He walked on stage to a video montage that featured footage of Black Lives Matter demonstrations.

And he praised Lawrence’s fight for justice—without mentioning the police corruption that tried to deny it to her. Incredibly, the punchline to this was to complain that there are not enough cops, and to promise “tougher sentences” and a crackdown on “anti-social behaviour”

Starmer’s answer to racist booing of black football players was to reply, “In this party we are patriots.” And on wars and the military he said he was “proud” of the British army in Afghanistan. “It grieves me to see Britain isolated and irrelevant,” said Starmer. “Labour is the party of Nato.”

The other side of this was to repeat his hopeful plea to bosses.

Boris Johnson’s Tory government has left the system in a crisis—and only Labour can be trusted to bail it out. Starmer promised bosses “a smart government” and a “prosperous economy” by “investing in our businesses”.

“Under my government, Labour will be back in business,” he said. “Good business and good government are partners.”

All Starmer had left to offer working class people were platitudes.

He had plenty to say of all the awful things the Tories had done—to the NHS, to benefits claimants, to schools. The climate crisis, he said, was “the hardest question and the biggest answer of our time.”

But his answer to almost all of them was give money to “British business.”

If you’re low paid, unemployed, or on a zero hour contract—Starmer had nothing to give you. Though the Tories had “shamefully” cut Universal Credit, Starmer wouldn’t promise to reinstate the money.

After all, Starmer had spent the week telling his ministers not to back unions’ calls for a £15 an hour minimum wage.

No wonder party members hated it. Some members in the hall heckled him with shouts of “£15 an hour.”

“Slogans or changing lives,” Starmer replied. But his own speech was full of slogans and nothing at all life changing. 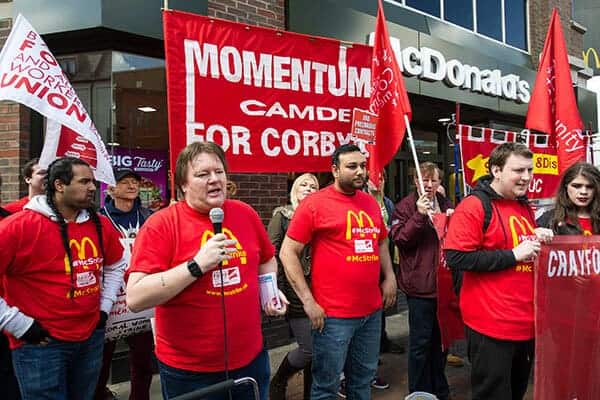 Even Labour members who wanted to Starmer a chance thought it was poor.

“I went in there prepared to listen,” one member, who didn’t want to give her name for fear of being expelled, told Socialist Worker. “But I was disappointed. All the stuff about business, we’ve heard it before. And the idea that Corbyn’s promises were unrealistic just isn’t true.”

“I didn’t find it particularly uplifting really,” said another member. “If you were looking for a clear vision, it didn’t really come through.”

Others were harder still. One left wing activist, Manni, told Socialist Worker, “It’s a failure. It’s a return to neoliberalism and the status quo.

“It’s not what the party needs or even what the people of this country need. He doesn’t represent the party—but I will stay in the party out of solidarity with my comrades.”

A Labour spokesperson described the speech as where Starmer “set out what he stands for.” And that is a Labour Party that wants to offer everything to bosses, nothing to working class people—and certainly not a fight against the Tories.

The question for the Labour left is whether that’s a party they want to stay in. 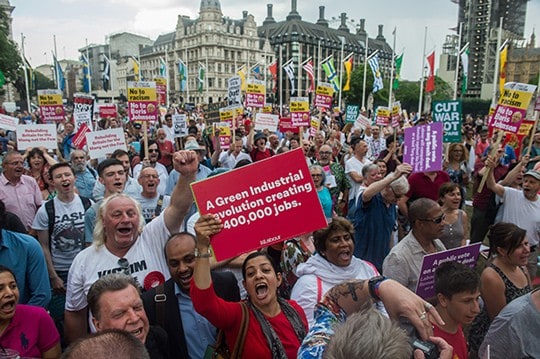