This article is over 9 years, 0 months old
Unemployed people will be forced to work or lose their benefits under plans unveiled by Labour’s shadow chancellor Ed Balls.
By Tom Walker
Downloading PDF. Please wait...
Saturday 12 January 2013

Unemployed people will be forced to work or lose their benefits under plans unveiled by Labour’s shadow chancellor Ed Balls.

Labour made an issue of opposing some elements of the Tories’ welfare attacks. Then, after a few days of abuse from the right for being “soft on scroungers”, they panicked.

So they came up with their very own “workfare” scheme. It would see every adult under the age of 25 who is out of work for two years forced into compulsory work.

Balls said that “a one nation approach to welfare reform” means “those who can work must be required to take up jobs or lose benefits as a result—no ifs or buts”.

He calls this a “jobs guarantee”, but the reality is that it would force millions into low-paid work, with bosses exploiting the fact that they couldn’t quit. It also ignores the fact that many people can’t find work because the jobs are not there.

Labour was set to vote to oppose the 1 percent cap on benefit increases as Socialist Worker went to press. But this wasn’t a principled defence of benefits. Rather it was because Labour thinks the cap is a “one size fits all” measure that will hit some of the “wrong people”.

So, the party leadership is against the cut hitting people in work who receive tax credits.Labour leader Ed Miliband calls this “a tax on strivers”. Apparently it’s much more acceptable to force those who are out of work deeper into poverty.

In fact Ed Balls said the problem is that the cut will not hit “the workshy”. Even this half-hearted challenge is facing opposition from a “caucus of New Labour figures”, including expenses-fiddling former home secretary Jacqui Smith. They want the party to simply vote for the cut.

» ‘Bedroom tax’ will force people out of their homes 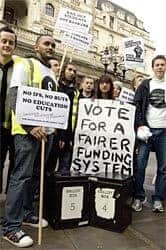