The clear winner of the first Labour leadership candidates’ debate, held at the GMB congress in Southport last Monday, was also the one who seemed least likely to get on the ballot paper.

John McDonnell, the left wing candidate for the top job, was cheered from the moment his name was first announced.

It was the simple message of opposing and fighting cuts from him and Diane Abbott that overwhelmingly got the best response from delegates.

Part of the reason for McDonnell’s popularity was that he answered questions like “would you commit to universal free school meals if elected?”, simply with, “yes!”

The other candidates took much longer to say “sort of”.

McDonnell told delegates, “I’m not standing as old Labour or new Labour – I’m standing as Labour. We need to represent a real alternative to Cameron and the Tories.

“This economic crisis was not caused by us, and we have to say that we’re not paying.”

The Tory press have bleated about him joking that when he was asked what he would do if given the chance to go back in time, he would “go back to the 1980s and assassinate Thatcher”. But not only did the audience get the joke – they cheered again.

McDonnell finished by saying, “We will end privatisation, and we will restore public services that have been privatised.

“I want a right to strike. I want social rights, the right to a decent home, the right to free education – and that means scrapping tuition fees.

“I want the right to live in peace, no more Iraqs, withdraw from Afghanistan.

“We don’t mourn after the loss of an election – we organise.”

While Diane Abbott was not as well received as McDonnell, she was clearly to the left of the rest of the candidates.

She pointed out her opposition to the war in Iraq, and that she is “opposed to public services in the private sector, full stop”.

The left wing candidates’ popularity riled the bookies’ favourite to win the contest, David Miliband, who responded grumpily, saying they were falling for “claptrap that we left Britain broke and broken”.

There is a real audience in the trade union movement for John McDonnell’s ideas – and many delegates stood to applaud him at the GMB congress.

If John McDonnell does not get enough MPs’ nominations to make it on to the ballot paper, it will be a cruel indictment of today’s Labour Party.

One Burnham and two Milibands, but no Balls

The air was thick with calls for “values” and “reconnecting” as the four more right wing candidates spoke.

They all seemed suddenly very keen on trade unions in general and the work of the GMB in particular.

He overplayed his act as a “working class guy made good”, but didn’t talk like a think-tank. It’s almost a shame he’s the most Blairite candidate.

He complained that the government was made up of “millionaires making cuts without compassion”, seeming to hint that as long as you were sorry about the cuts it would be OK.

He went on to say, “It was right to be tough on crime and pro-business.

“Labour is nothing if it’s not about breaking down elites,” he added. “We’ve been too elitist in recent years.”

Which, naturally enough, brings us to the Miliband brothers.

David Miliband said he will be known to the union, not just because of his words, “but because of what I’ve done”. “That’s his problem,” said the delegate next to me.

The former foreign minister – infamous as Labour’s “minister for torture” – went on, “We need something authentic about our politics. I believe passionately in the power of public services to change people’s lives.”

Unfortunately he followed that by defending the anti-union laws.

And he argued he couldn’t rule out privatisation because he was “proud” of the work of Macmillan nurses.

Even the chair interrupted him at that stage to suggest he’d missed the point.

David’s little brother, Ed Miliband, was remarkable for being unremarkable. Ed said Labour “lost its values”. And he said those “values” would guide him as leader.

In fact Ed says “values” rather a lot. But there was very little substance.

Still, he did better than the other Ed, Ed Balls – he didn’t even turn up.

One GMB delegate asked the Labour candidates how they would defend the Redcar Corus steel workers’ jobs.

The plant was “mothballed” earlier this year, putting hundreds out of work in Teesside.

The answers the candidates gave show up the divisions and arguments about where Labour should be going.

Labour lost a 12,000 majority in Redcar to the Liberal Democrats at the last election, specifically on the issue of the Corus jobs.

David Miliband said the government will have to decide whether to continue Labour’s industrial investment – and that the problem was the loss of customers for Corus’ steel.

Andy Burnham said he was really worried about the future of the plant.

He pointed out that the Tories “damage people’s hope, people’s future”.

“A Tory government has damaged these communities in the past – we won’t let it happen again,” he said.

Ed Miliband said he will oppose the government “tooth and nail”, and that Labour must not allow the Tories to “sacrifice the economy on the altar of cuts”.

Diane Abbott added, “Multinationals have been allowed to act like bandits in this country.”

All of which was nice, but didn’t say much about saving jobs at the plant – and ignored the point that Labour was in charge when it closed.

John McDonnell said, “We’re in a recession, but we’ve got to increase demand and investment to get out of recession.”

And he argued not just for investment in manufacturing, but for the plant to be taken into public ownership to save the jobs.

Simple, really – and the audience response showed they understood. 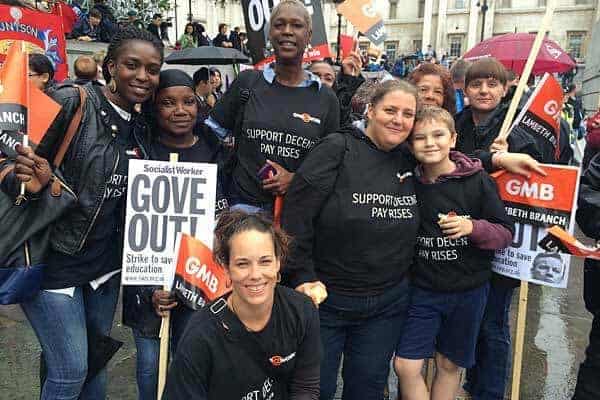