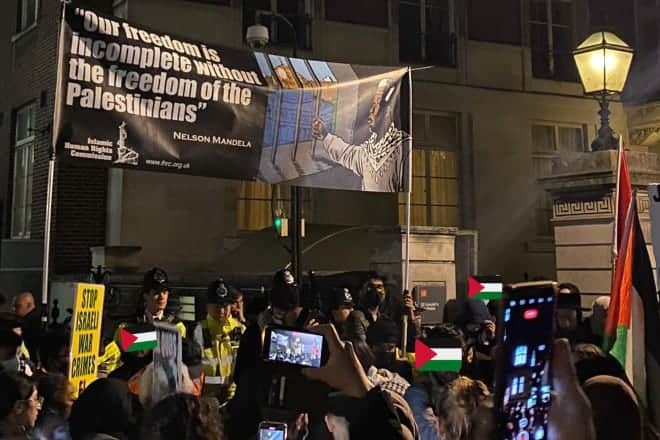 Protesting on Tuesday at the LSE against Israel’s ambassador (Pic: LSE for Palestine on Twitter)

The Labour Party has turned on pro-Palestinian students after a protest against Israel’s racist ambassador Tzipi Hotovely on Tuesday evening.

Hundreds of people joined the protest against Hotovely as she spoke at the LSE university in central London on Tuesday evening. But Keir Starmer and two leading Labour politicians denounced the protest—with one even implying it was antisemitic—and supported police action.

Starmer called the protest “totally unacceptable.” He added, “Intimidation and threats of violence will not be tolerated.”

Earlier that day, shadow home secretary Nick Thomas Symonds said the protest was “shocking”. He said, “Antisemitism has no place in our society. I wish Tzipi Hotovely well and support the police in any investigation.”

And shadow foreign secretary Lisa Nandy posted, “The appalling treatment of Israeli Ambassador Tzipi Hotovely is completely unacceptable. There is no excuse for this kind of behaviour.”

Student group LSE for Palestine organised the protest against Hotovely, who had been invited to speak at the student union’s debate society.

Hotovely has called for Israel to annex all Palestinian land. She has also called the expulsion of Palestinians during Israel’s foundation as “a very strong and very popular Arab lie,” and a “made up story.”

Israeli fighters expelled nearly one million Palestinians when Israel was created in 1948.

LSE for Palestine said Hotovely has also “contributed to the material oppression of Palestinians by planning and permitting illegal settlements in the West Bank as Israel’s first settlements minister.”

It added that the protest was “a tremendous display of solidarity with the Palestinians.”

In a statement, the student group explained that protesters gathered at the university’s library then marched to the building where the debate was held.

Although their chants could be heard inside, and a group walked out of the debate, “this was the only internal disruption and the event continued to completion”.

Protesters gathered at both of the building’s exits as the event ended. Hotovely left safely—carrying flowers the university had given her—while “police physically assaulted students.”

The statement said, “Contrary to false reports, Hotovely did not ‘flee’ the university.

“Students maintained a peaceful protest throughout the evening and it was the police who incited violence.”

Supporters of Israel used a video of Hotovely’s exit—which shows nothing more than a loud protest—to level baseless accusations of antisemitism at protesters.

Top Tory ministers backed them. Home secretary Priti Patel tweeted that she was “Disgusted by the treatment of the Israeli Ambassador at LSE.”

Israel—a state founded on lies has to keep its past hidden
Read More
She added, “Antisemitism has no place in our universities or our country. I will continue to do everything possible to keep the Jewish community safe from intimidation, harassment & abuse.

“The police have my full backing in investigating this appalling incident.”

Supporters of Israel have long tried to conflate opposition to Israel with hatred of all Jewish people. They want to shut down all solidarity with Palestinians—and now the Labour Party is joining in.

Right wing members of the Labour Party hurled accusations of antisemitism at the party’s former leader Jeremy Corbyn because of his support for Palestinians. Rather than challenge the accusations, Corbyn repeatedly conceded to them.

He hoped this would allow him to stay on as Labour leader. Instead, it gave credibility to the accusations—and encouraged the right to make further attacks on Palestine solidarity.

Now supporters of Israel want to renew their attacks on pro-Palestine activists in universities—and the Labour Party is desperate to show it’s on their side.

The best way to fight back is to follow LSE for Palestine’s example—defend the right to protest against Israel and its racism.