Confident on the picket line in Coventry

Around 75 Coventry refuse collection drivers are striking over pay, alongside an indefinite overtime ban.

The workers struck for two days last week and were set to strike again from Tuesday to Friday this week, as well as on Tuesday and Friday next week.

And they recently announced more strike days towards the end of January and throughout February and March.

Union membership is well over 95 percent of the workforce.

Almost every driver has been on the picket line, with the exception of drivers having to isolate.

The one driver who originally took a truck out on the first hour of the dispute relented and joined the strike immediately after.

The Labour council’s response to the pay claim was to offer to increase their contractual hours to 45 hours a week to cover the claim.

In effect, rather than increasing hourly pay, the council offered workers longer working days instead.

This is a far cry from the Labour council’s claims.

As one striker put it, “If we were earning what they claim we are, then we wouldn’t be on strike.”

Refuse workers in Eastbourne continued a strong strike this week over pay and conditions, and now more workers are voting to join them.

Drivers in Adur and Worthing were set to vote in a consultative ballot for strikes this week.

The ballot will close on 19 January.

The workers are members of the GMB union.

Workers struck last Friday and on Monday of this week, blocking lorries from crossing picket lines and leaving the depot.

A striking worker on a picket line said, “Now we’ve consolidated with Lewes council we should be paid the same as the Lewes refuse crews. We do the same job. We’re run by the same council. We’d like fair pay across the board and conditions.”

Further strikes were set to take place from Friday of this week until Friday 28 January.

Drivers are in a solid position to fight for more pay due to a shortage of workers. More workers joining this fight will only make this strike stronger. 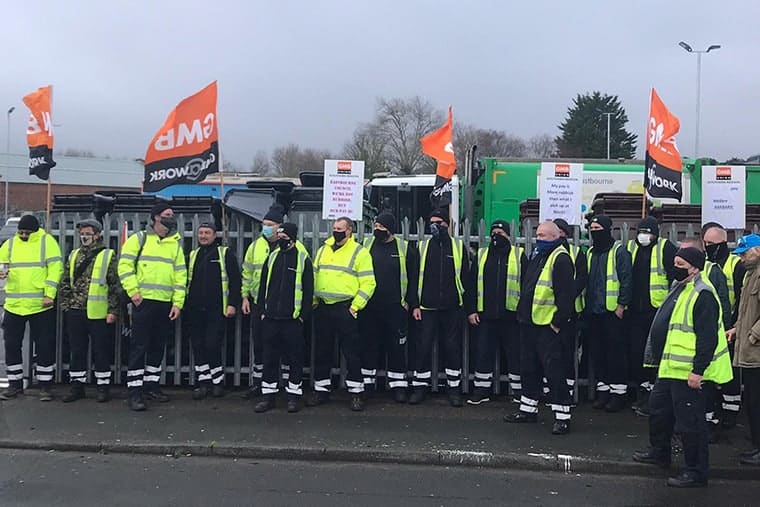