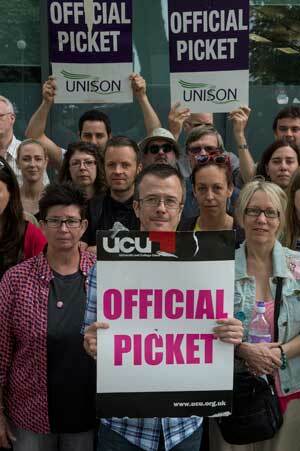 At a strikers’ rally in Clapham this week (Pic: Guy Smallman)

Vindictive bosses have gone on the offensive to try and smash an all-out strike at Lambeth College.

UCU union members at the south London college have been on strike since 3 June against new, worse contracts.

Bosses are hauling in dozens of workers for interviews as part of a redundancy process—even though they are only looking to make one redundancy.

But instead of demoralising strikers it has only added to their anger—and their determination to fight.

Frances teaches English for Speakers of Other Languages (Esol) and was interviewed for her job this week.

“It was a real waste of time,” she told Socialist Worker. “They asked farcical questions and it didn’t feel genuine.

“They sent out interview dates before they knew numbers of voluntary redundancies. The process is aimed at demoralising us.”

Unison union members began a three-day walkout at the college on Tuesday of this week—their second strike against the contracts.

Unison rep Jim told Socialist Worker, “The mood among workers is really positive. I was quite surprised at the Unison conference last week because everybody seemed to know about our dispute.”

Many workers—and bosses—are watching Lambeth College because the dispute has much wider implications.

“Everyone’s aware that these changes will spread if we don’t stop them now,” said Jim. “People have been saying to us how important it is that we win.”

UCU picket Frank agreed. “This is much bigger than Lambeth College,” he told Socialist Worker. “We’ve heard of lots of other disputes breaking out over contracts and job cuts similar to ours.

“Every year it’s more of the same—they cut courses and cut opportunities. They want an education system that can only be accessed by those with money and privilege.”

One Unison picket said attacks in further education were “politically-minded”.

“They are picking a fight with the unions,” he said. “It’s bully-boy tactics. And they’re writing people off who need a second chance at education.

“These are hard times and it’s working class people who are bearing the brunt of it.”

The mood on the picket lines has been resolute. Principal Mark Silverman has claimed that the strike has no support.

Yet more workers have joined the unions to take part in the action. And the tooting of horns for pickets and messages of support flooding in tell a different story.

Bridget is a student learning to teach Esol at Lambeth College. She told Socialist Worker that students in her class had written to Silverman opposing the attacks on contracts.

“They’d be devastated if workers went back without any significant victories,” she said. “They’re completely supportive of the strike.”

The action is hitting Silverman hard. Strikers told Socialist Worker that enrolment is down drastically. College sites are quiet and classes are cancelled.

Workers must use their advantage to ramp up the pressure on Silverman. They should demand their national unions do a lot more to drive the dispute forward.

Both unions have declared the struggle important. The UCU has declared it a dispute of national significance.

But strikers need more than warm words. The national unions should be throwing the full weight of their resources behind the strikers and delivering active solidarity.

Picket lines from 7am every day in Brixton, Clapham and Vauxhall and a mass meeting each day at 11am at the Clapham site. Organise collections or weekly levies to support the strike. Invite strikers to speak in your union or campaign meeting. Messages of support to [email protected]
Topics Education, Lambeth, teacher, UCU, Unison 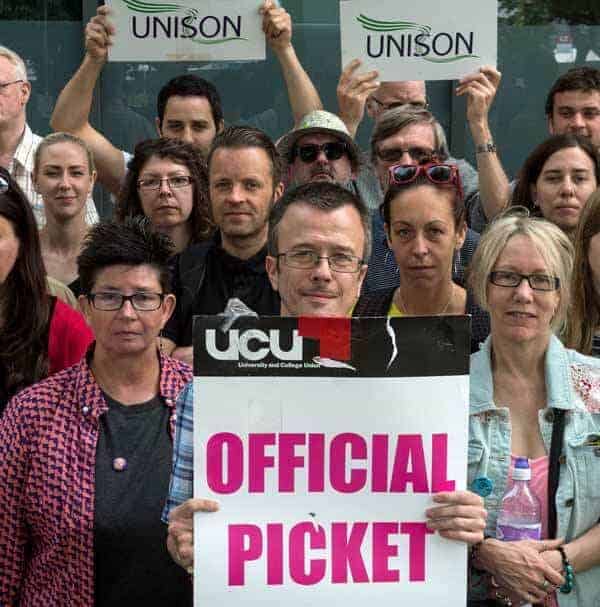 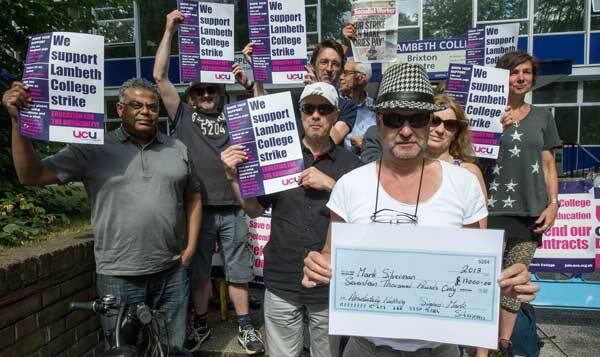