This article is over 11 years, 10 months old
The Scottish Labour Party has been shaken by the resignation of the leader of Glasgow City Council, Steven Purcell.
By a Glasgow council worker
Downloading PDF. Please wait...
Tuesday 09 March 2010

The Scottish Labour Party has been shaken by the resignation of the leader of Glasgow City Council, Steven Purcell.

Purcell was seen as Labour’s “rising star” and tipped to be a future Scottish Labour leader.

The editor of the Scottish edition of the Sun described Purcell as an “arch Blairite” and said, “I am sure that if Purcell had been born somewhere else he would have been a Tory.”

All week the media was filled with speculation about Purcell’s personal drug difficulties.

A Glasgow council worker told Socialist Worker, “There is some sympathy in Glasgow for Purcell’s personal difficulties.

“However the real scandal in Glasgow is the New Labour policies which wrecked the city.”

Under Purcell, Glasgow was “open for business”.

While local schools and community centres have been closed, large scale projects such as the M74 motorway extension, the new Transport Museum and Glasgow Harbour Developments have all benefited multinational firms.

The multinational Serco is involved in a partnership agreement with the council to provide “backroom” services.

In April 2010, the council intends to hand over control of its land and buildings to City Property, an “arms’ length” company, so “unwanted assets” can be sold off.

Purcell is “recuperating in the sun”, but council workers have to live with the pay freeze he publicly championed. 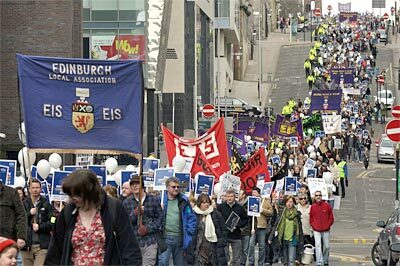