This article is over 15 years, 7 months old
The lecturers’ strike has seen a growth in organisation on the ground. Here are some recent examples of the mood around Britain.
Downloading PDF. Please wait...
Saturday 10 June 2006

The lecturers’ strike has seen a growth in organisation on the ground. Here are some recent examples of the mood around Britain.

Some 400 angry lecturers publicly burnt letters from the director of human resources on Thursday of last week.

Two weeks ago the director of human resourses at the University of Liverpool wrote to all academic and academic related staff stating that “pay will be deducted at 28 percent… for anyone who does not sign and return the attached form to confirm they are not taking action short of a strike”.

Lecturers responded by setting up a garden incinerator in front of the university’s administration building and union members queued up to burn their reply forms.

Lecturers and students from across the north east of Scotland joined a rally in Aberdeen on Thursday of last week in support of union members at Robert Gordon University who are threatened with 100 percent wage cuts.

Staff and students from the neighbouring Aberdeen university marched together to the rally.

Abed Bandim, president of the Robert Gordon Students’ Representative Council, told the meeting, “Management should withdraw their threats. Lecturers are part of our education. When we go to our graduations it’s not just our parents who are happy and supporting us.”

Over 120 Sheffield lecturers crammed into an emergency general meeting on Wednesday of last week.

They expressed their opposition to, and disgust at, management’s plans to dock 30 percent from the pay of staff who are refusing to set and mark exams as part of the union’s action short of a strike.

There was a clear determination that bully boy tactics would not intimidate us. The meeting called for escalation of the action, for withdrawing from non?compulsory activities while the threat of pay docking continues, and to explore the possibility of a local ballot in response to our employers’ scurrilous attack. 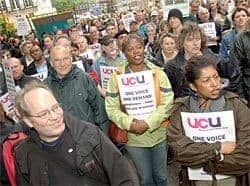 Make or break for lecturers' dispute