This article is over 12 years, 8 months old
Lecturers in universities across Britain are taking part in a critical ballot that centres on defending education and fighting job cuts.
Downloading PDF. Please wait...
Tuesday 12 May 2009

Lecturers in universities across Britain are taking part in a critical ballot that centres on defending education and fighting job cuts.

Workers in the UCU union began balloting at the start of May after the employer warned that around 100 universities would make job cuts.

The cuts would have a devastating impact on education provision and would lead to the poorest students being forced out of education.

At a time when so many people are facing job losses, a yes vote in a national ballot for action to defend jobs would give all workers a boost.

Carlo Morelli is a lecturer at Dundee University. “We had a union meeting last week and people are pretty confident about fighting for jobs,” he told Socialist Worker.

“At Dundee we are currently fighting against two job losses which it looks like we will save.

“Too many union branches have allowed jobs to go.

“But we’ve campaigned at Dundee and it shows that if you stand up and fight it will get a resonance.”

Lecturers are also angry about their latest pay offer of 0.3 percent.

The UCU union, along with all other unions in higher education, have rejected the offer.

They are also standing united in demanding a national agreement on job security.

A successful vote in the ballot will increase workers’ confidence to fight over other issues.

Workers need to circulate leaflets and call union meetings to build the yes vote. The ballot ends on 22 May.

Go to » www.ucu.org.uk for campaign materials and for more information on the ballot 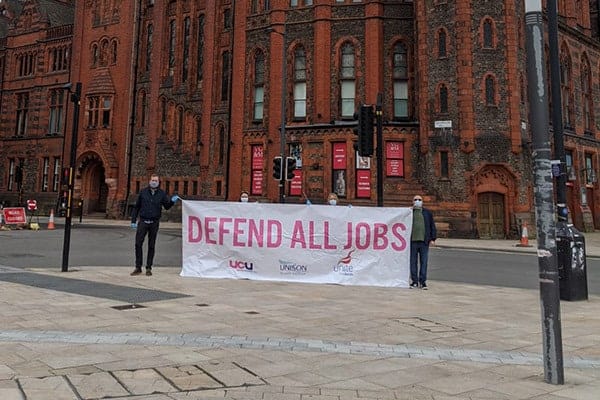 Egypt: The fight for democracy that Straw won’t mention