This article is over 12 years, 4 months old
Lecturers at King’s College London took part in the university’s first ever strike this Tuesday. They are fighting management plans to slash over 200 jobs.
By Sadie Robinson
Downloading PDF. Please wait...
Tuesday 30 March 2010

Lecturers at King’s College London took part in the university’s first ever strike this Tuesday. They are fighting management plans to slash over 200 jobs.

“In my department, half of us have been told we’ll have to go,” a lecturer from the American studies department told Socialist Worker. “Everyone has to reapply for their jobs.

“There are no other academic jobs to go to. If you’re an older worker, that’s very serious.”

The campaign to defend jobs and education has won support from students and drawn more workers into the union.

“We are the fastest growing UCU union branch in the country,” said Jim Wolfreys, the union’s president at King’s.

“This university doesn’t have a longstanding tradition of trade union activism but we had the highest vote for action in the union’s history.

“At a time when people like BA boss Willie Walsh are intent on attacking trade unions, we want today to be a celebration of resistance.”

Students have organised to defend education and their striking lecturers.

They brought banners and stickers to the picket lines reading, “We support our teachers” and wore green armbands to show their support for the strike.

“Management had a ‘consultation’, but in reality they made their decisions behind closed doors,” said one European studies student.

Aude, another European studies student, added, “Education is a right.

“They shouldn’t be cutting it—especially at a time of crisis when people are losing their jobs and want to go back to college.”

Determination to defend education encouraged people to strike. “I’m worried for future students,” said one worker in the computing department.

“If they close departments, we’ll never get them back.

“People might say you can go and get another job but I think you have to fight for what you believe in.

“I believe in education and I don’t want this university to be run like a business.”

“The government hasn’t bailed out universities like it did for the banks,” said Stathis Kouvelakis, a politics and philosophy lecturer.

“The cuts are part of the government’s attack on the public sector.

“They will try to divide public sector workers from those in the private sector.

“But struggles are happening everywhere and they can win—we saw it at Leeds university and at Tower Hamlets College.

“We should bring all the struggles together to build a stronger fightback.” 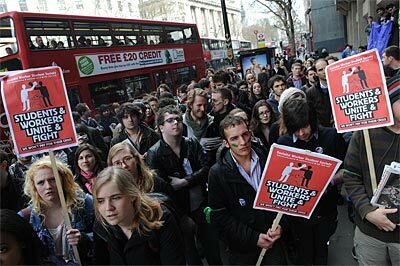 Picture from the King's College strike