This article is over 12 years, 3 months old
Around 600 Leeds refuse workers have been on all‑out strike for more than two weeks in a battle against the Tory/Lib Dem council.
By Tom Walker
Downloading PDF. Please wait...
Tuesday 22 September 2009

Around 600 Leeds refuse workers have been on all‑out strike for more than two weeks in a battle against the Tory/Lib Dem council.

Neil, one of the strikers, told Socialist Worker, “The council wants to cut our pay by £6,000 a year. If I lose that, it’s my mortgage and my car gone.

“I’ve been doing this job for 13 years. We’ve already had a pay freeze for three years.

“We’re proud of the service we provide. Last year we all got a ‘cleanest city’ award—a little statue of a man and a wheelie bin.

“But now the council want to cut our pay.”

Strike supporters dumped 14 bags of stinking rubbish on the doorstep of council leader Richard Brett on Wednesday of last week with a message stuck to them—“Solidarity with striking refuse collectors.”

“We pick up rubbish for a living, but that doesn’t mean we have to be treated like rubbish,” striker Marco told Socialist Worker.

The pay cuts are the latest in a series of disputes over “single status”—a change in equal pay rules that many councils have used to try to drag down everyone’s wages.

In Leeds, the strikers are among 2,500 council workers who have been told they must take a savage pay cut.

Neil explained, “They say they’re raising the pay of low-paid workers—dinner ladies, cleaners—so they say they have to take the money off us. But the reality is that some of those workers are getting just a few pounds extra, and some are getting nothing.”

The strikers have a lot of support across Leeds.

But there has been a more unusual sight on the picket line—local Labour councillors and Labour MP Hilary Benn.

The local Labour Party says it wouldn’t have made the cuts.

But it is Labour that is pushing through the cuts nationally.

And a Labour council is no protection. In Labour-run Glasgow, for example, hundreds of council workers have already struck against vicious single status pay cuts.

The Leeds strikers are determined to win.

“It’s a dirty job, the work we do,” said Neil. “I’d like to see the councillors come down here and try to do it for a week.

“They can afford to pay us. They just don’t want to. That’s why we have to fight.”

Refuse workers and street cleaners in Liverpool have settled their strike. The deal will see 600 workers get pay rises of between 1 and 3 percent from April 2010, and a guarantee of no job losses.

The workers had been taking rolling strike action since the end of August, which involved determined picketing. 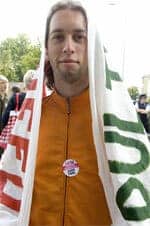