This article is over 12 years, 3 months old
Striking refuse workers in Leeds today voted by a massive 92 percent to reject a "final offer" from the council.
By Sadie Robinson
Downloading PDF. Please wait...
Wednesday 21 October 2009

Striking refuse workers in Leeds today voted by a massive 92 percent to reject a “final offer” from the council.

The workers are in their seventh week of strike action against council plans to slash wages by up to £6,000. The council’s latest offer reduced the amounts that workers would lose—but it still contained cuts along with various attacks on workers’ conditions.

“The vote today was overwhelming,” one worker told Socialist Worker. “The main reasons for voting against were the strings attached to the offer. For example, some workers would have their shifts changed to include compulsory weekend working and working bank holidays.

“But there are a number who said they go to church on a Sunday and would be unhappy working Sundays. Many people take a five-day Monday to Friday job because they want their weekends free to spend time with their families.

“The council’s offer would also end the ‘task and finish’ that operates at the moment—where people stop work once they’ve finished their job. It would increase working hours for some, cut the pay of some drivers by £1,000 straight away and introduce bonuses for productivity rises that we think are unachievable.

“I’m a driver and I start at around 6am and usually finish at around 3pm, but under the council’s latest offer I’d have to work until 5pm. I think over eight hours driving is enough for anybody.”

The council tried to divide workers with its offer—promising different things to different groups of workers—but the huge vote to continue strike action shows that this has failed.

As Gary, a driver, put it, “We came into this dispute together and we’re not leaving people behind. I’m not going to stand and watch my mates get done over.” 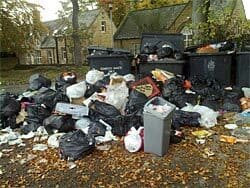