TUSC is a coalition that has come together to put forward a left alternative to the main parties at the general election.

Jenny is the branch secretary of the UCU lecturers’ union at the College of North East London (Conel).

A dozen lecturers from Conel joined the day of action.

Clare Richardson, one of the lecturers, told Socialist Worker, “Conel is the second largest employer in the borough and it’s being slashed.

“Lammy is the minister for higher education. When we lobby him about cuts in education, he says ‘It’s not my remit.’ If he can’t help, who can?” Conel faces £2.5 million in cuts.

Conel used to provide English for Speakers of Other Languages courses to help people learn English on the estate.

These were very popular but have been cancelled due to cuts.

Ilker said, “I am here because Jenny is against war, cuts and unemployment.

“Here in Haringey, unemployment is very high. It’s one of the worst affected boroughs.

“I want to support a real alternative to Labour and the Tories.”

A meeting of the UCU last week at Conel backed Jenny’s election campaign overwhelmingly, with 68 out of 70 members present voting to support her.

“We were warmly received and they agreed to give at least £100 from their local political fund to both campaigns,” says Jenny. 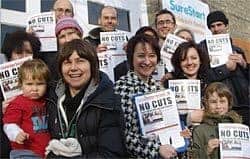