This article is over 12 years, 3 months old
The post dispute is at a crucial point. Thousands of workers took part in the 15th wave of regional strikes this week.
By Yuri Prasad
Downloading PDF. Please wait...
Tuesday 06 October 2009

The post dispute is at a crucial point. Thousands of workers took part in the 15th wave of regional strikes this week.

Now, with the result of the CWU union’s national strike ballot due this week, they could be joined by more than 100,000 of their colleagues from across Britain.

They are in a strong position. With Christmas approaching, mail volumes will be high for weeks to come.

Royal Mail bosses are stepping up the scabbing operation in response.

They are reacting to the huge backlogs of mail generated by solid regional strikes by flooding offices with managers and casual staff.

And, as Socialist Worker reported last week, they have set up scab mail centres in Dartford, Bristol and elsewhere.

More than 1,500 managers, some from as far away as Belfast, travelled to London last week to process mail, deliver packets and intimidate strikers.

In a desperate bid to clear offices of the boxes and cages of mail that are piling up, managers in north London employed some 70 owner-operator van drivers to make deliveries last weekend.

Activists say that these attempts to undermine the strike demand a swift and tough response from the union.

“We are facing ruthless management tactics and we must hit back,” Andy Bell, a senior drivers’ rep at Glasgow mail centre, told Socialist Worker.

“I want every office in the country out together on the same day. We need the action called quickly.”

Andy says that following unofficial action last month, management have put every rep in the West of Scotland on a “punishment charter”, with their union facility time removed.

“It’s a clear attempt to undermine the union,” he says.

“But their strategy is backfiring. The more they punish us, the angrier people become.”

He says that the key to victory lies in the union announcing prolonged action as soon as possible after the national strike vote is announced.

“After 15 weeks of action the offices in my area are as strong as ever,” he told Socialist Worker.

“But people are furious about the jobs that are being slashed, the ripping up of our conditions and the constant management bullying.

“And they are also rightly concerned by management’s scabbing operation. They want us to retaliate.

“There must be no question of offering Royal Mail a moratorium on future strikes in order for talks to continue.”

Mark says to do so would risk frittering away the backlog that has been built up over weeks.

He says, “It also risks wasting the build up of anger in the offices. It would be criminal to hand managers the initiative by delaying action.”

A sign of postal workers’ resistance can be seen at the east London mail centre.

Workers there say that the night shift would normally be expected to process around 1.5 million items.

Since the start of local action the centre has only rarely cleared more than 800,000 items.

The union must tap into the workers’ spirit. And, if the bosses attempt to derail national action by running to the courts, activists must be prepared to take the strike unofficial.

Chris Webb, a CWU union divisional rep from the south west of England and South Wales, is facing disciplinary action by Royal Mail for “conduct on picket lines”.

Chris’s division have voted to ballot for strike action in the event of Chris being sacked.

Solidarity appeal: Everyone must back our battle for a public service 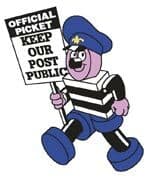