THE AUSTRALIAN government has set new standards for callous treatment of refugees. Its attitude to the 460 desperate refugees rescued by the Norwegian freighter Tampa from their sinking boat on Sunday 26 August was “let them drown”. John Howard, the Liberal (Tory) prime minister of Australia, has ignored the refugees’ pleas to be allowed to come to Australia.

He was happy to leave them (including two pregnant women and 43 children) living amongst the ship’s containers with little food or water in the baking sun. Press and politicians in Britain who have encouraged a “tough” approach to refugees have backed Howard.

Daily Mail columnist Simon Heffer wrote an article headlined “What We Can Learn From The Aussies”, urging Britain not to be “soft” on asylum seekers. Foreign secretary Jack Straw said, “It’s not in the interests of the world if we allow people just to break international agreements or come into domestic waters without immigration controls.” If Howard gets away with this it will mean ships are less likely to rescue refugees for fear of being stuck in the ocean with a human cargo nobody wants. Over 400 refugees are estimated to have drowned off the coast of Australia in the past year.

Howard caused panic among the refugees aboard the Tampa when he sent 50 SAS troops aboard on Wednesday of last week to try to force it away from Australia. But the Norwegian captain refused to leave and sided with the refugees. He said, “A lot of them were screaming that they were going to be shot or arrested. Some of them were going to jump overboard as the uniformed troops got closer.”

The ship was stranded off the nearby Australian territory of Christmas Island.

It has a population of 1,500 people and for years was used as a “nuclear playground” for British governments which carried out nuclear tests in the region until 1962.

Its people are not in fear of being “swamped” by refugees. Councillor Gordon Thompson on the island said,”We applaud the actions of the ship’s captain to save these people. We are calling on the prime minister to open the port of Christmas Island and let these people in.”

Such compassion has certainly not moved John Howard. He says, “We simply cannot allow a situation to develop where Australia is seen around the world as a country of easy destination.” There is nothing “easy” about the refugees’ journey. They have mostly fled Afghanistan.

The country was wrecked by years of war after the Russian army invaded in 1979. Now Afghanistan is ravaged by drought, and those who oppose the Taliban regime face persecution. Western governments exploited the Afghans’ fight against the Russian army. Then they abandoned the country to rival warlords and eventually to the Saudi-backed Taliban.

They haven’t welcomed the six million people who have fled the horror of life in Afghanistan over the last two decades. Around three million Afghan refugees are being left to rot in camps in neighbouring Pakistan and Iran. This is not the first time refugees have been turned away from what they hoped would be a safe haven. In June 1939 some 937 Jews from Germany were on a ship trying to escape the Nazi regime.

They were turned away from Cuba, the US and Canada. The Canadian immigration minister argued that “the line must be drawn somewhere”. The Jewish refugees ended up in various European countries where two thirds of them were murdered in concentration camps after the Nazis invaded. Howard, like New Labour and Tory politicians in Britain, does not argue that refugees can be a resource for the countries that welcome them.

They are teachers and doctors. They are young people eager to learn new skills and get qualifications to work and contribute to the society. Industrialised countries face a chronic shortage of labour. The international body the Commission on Global Ageing reported last week that falling birth rates will undermine the economy. “The major social crises of the 21st century will be the byproduct of labour shortages,” said the report.

It concluded world leaders should encourage immigration. Instead politicians present refugees as a “problem” that must be treated ever more harshly. In the process they give confidence to racists.$ Unions back the refugees

THE Australian government hoped its hardline attitude to the refugees would be popular. But one opinion poll revealed how support was being eroded. In a radio poll on Thursday of last week just 51 percent of people supported the government’s line as opposed to 81 percent on Monday.

Tad Tietze from Socialist Worker’s sister organisation in Australia explains: “Two main newspapers, the Australian and the Financial Review, have strongly criticised the government from the start. Others who were for the government have begun to soften their stance. The government is really desperate. It is deeply unpopular and faces an election no later than December. It also faces a resurgence of militancy among workers. Recently a strike at one car components factory shut down the whole Australian auto industry. Its last resort is to play the race card. The debate over the refugee ship has really polarised things. It comes after the case of a six year old Iranian boy in an Australian detention centre was on television two weeks ago. He has been unable to speak or eat after seeing another refugee attempt suicide, and the government wants to deport his parents. There has been a staggering number of letters to the newspapers in favour of refugees. We have been surprised how much support we have had from people when we have been petitioning in support of refugees. On Thursday of last week 300 people protested in support of the refugees in Melbourne and 200 in Sydney. Around 500 people demonstrated in Canberra on Friday. Some 200 demonstrated in Brisbane, including members of the Australian manufacturing workers’ union with their union flags. We have a group called the Refugee Action Collective. It put a statement in the press in early July. Four out of the six labour councils, which are the equivalent of regional TUCs, signed the statement. Now they have criticised the government over the refugee ship. They include the traditionally right wing New South Wales council. Its secretary, John Robertson, said, “People are being incited by the politics of hatred-no one seems to give a toss where these people go, as long as they don’t come here”.”

THE Australian government has installed camps for refugees that are run by a private firm that is also in charge of private prisons. The camps are in isolated desert areas. People can be held for up to three years.

One of them, Woomera, is ringed by razor wire. It houses 1,367 people in huts that can hit temperatures of 50 degrees centigrade. There is no air conditioning. Some refugees have gone on hunger strike to protest at their conditions. Australian journalist Peter Mares has written about the desperation of refugees at the Curtin detention centre who went on hunger strike last year:

“Words can scarcely capture the level of despair that leads a man to take a needle and thread and sew his own lips together, yet this is what more than a dozen detainees steeled themselves to do.”

There have been riots and breakouts at the camps as refugees can no longer bear their conditions. The government has used teargas, water cannon and armoured trucks against them. Immigration minister Philip Ruddock claims this appalling treatment is a deterrent. “The message gets back,” he says.

Persecution of the desperate

Shock and anger across Oldham 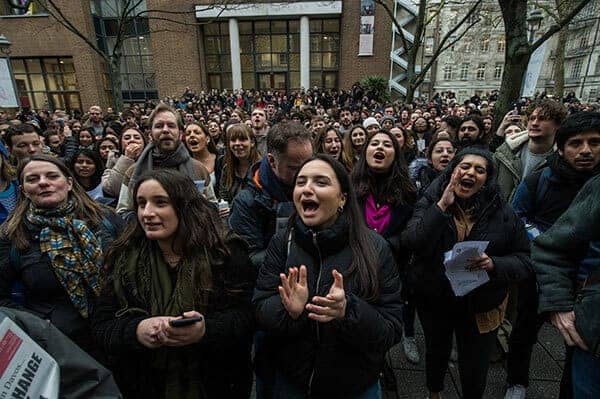