Some 200 people joined the flash protest. Laurie said, “This is all about trying to crush the working class. But we won’t take this.”

Children spoke about how they loved having school swimming lessons here. “Where will we go now?” asked Dylan, aged seven.

Dylan’s question was met with a commitment to fight to stop these cuts. As the TV cameras rolled, residents shouted, “We’re going to occupy to SAVE OUR POOL.”

Pensioners’ swimming groups and Asian women’s groups joined the protest. Many rely upon the centre as one of the few local places where they can meet and relax.

Others spoke of how their physical and mental health problems were helped by using the pool and gym.

Rachael Howe, a local resident, said, “My condition will get worse if the pool closes. I can’t manage to travel 40 minutes to other pools.”

Lorna, another protester, added, “I suffer from serve depression and I don’t know what will happen to me if the pool closes. The bankers and the Tories have private pools—they don’t care what happens to us.”

The protesters vowed to work together to organise against the closure of the centre and to oppose the cuts.

They signed petitions for Manchester Coalition against the Cuts and organised a march through Levenshulme High Street on Saturday 12 February.

And they agreed to join the Manchester demo against the cuts on 5 March—and to take whatever direct action is needed to fight back.

As resident Eva Fillingham put it, “We won’t stand by and let this happen. I am so angry, I have to do something. We need to organise and fight, fight, fight.” 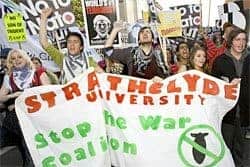 Out to stop job cuts at Manchester College