Lib Dems are all things to all people

Lib Dems are all things to all people

TONY BLAIR is so pro-business that he makes all sorts of politicians seem left wing. That is true of Charles Kennedy’s Liberal Democrats. Some people hope they offer a left wing alternative to New Labour at the general election.

The Liberal Democrats have been the third party of British politics for the last 70 years. So they have looked to gaining votes at the expense of Labour and the Tories.

That means they will say anything. Their left wing rhetoric in recent years is a sign of the left wing mood in British society, not evidence of their principle. On key issues the Liberal Democrats accept the policies of both New Labour and the Tories. They argue that the free market is the only way to run society and have no plans to reverse the years of privatisation.

They support Trident, Britain’s nuclear submarines. The Liberals voted for the Tory anti-union laws of the 1980s and 1990s. Their policies are even more anti-union than New Labour’s. In all of the major industrial struggles of the 1980s-such as the miners’ strike and Wapping-they backed the bosses and the government. They supported the Falklands, the Gulf and the Balkan wars. They also rescued John Major’s Tory government in 1993 when it almost fell over the issue of Europe.

THE LIBERALS have always been a party of the ruling order. They were the main party of the industrial capitalists in the 19th century. They won some support from sections of workers. But when capitalism entered a crisis in the mid-1880s the Liberals were unwilling to carry out reforms. Many newly militant workers began to see them to be as much the enemy as the Tories, who represented the landowning interests. The Labour Party grew out of the feeling of many trade unionists that there had to be a political alternative to the two ruling class parties for working class people.

Working class support for the Liberals shattered in the years before the First World War, when the Liberal government used the army against a wave of strikes. The Liberal Party split in the 1920s and was gradually overtaken by Labour. The huge mood for change after the Second World War brought a Labour landslide which buried the Liberals.

It wasn’t until the early 1970s, under a new breed of “modern” politicians, that the Liberals began to pick up support again, as the Tory and Labour governments of that decade disillusioned millions. They attacked Labour from the right.

But in 1976 Liberal leader David Steel led his party into James Callaghan’s Labour government, and helped push through pay and welfare cuts. Those cuts created deep bitterness, which Margaret Thatcher was able to tap to win the 1979 election. There was a big swing to the left inside the Labour Party as a result. But a section of the right wing broke away in 1981 to form the Social Democratic Party.

With the Liberals, they ensured that Thatcher won a landslide in 1983. The Liberals fought a nasty anti-Labour campaign that year. That included an anti-gay witch-hunt against Labour’s Peter Tatchell in Bermondsey, south London, which got Liberal Simon Hughes elected. Liberal leader Paddy Ashdown welcomed Blair’s election as Labour leader in 1994. He supported New Labour’s moves to abandon the principle that working class interests should be represented in parliament.

The Liberal Democrats have no such principle. They are accountable only to their business backers and the ambitions of their politicians.

What they do when in power

Socialist Worker spoke to three people who have had recent experience of Liberal Democrat councils.

“THEY ARE more New Labour than New Labour. They pose as a left wing opposition, but the first thing they did when they started running Sheffield council two years ago was privatise the housing benefit services. There have been massive rounds of privatisation ever since. The Private Finance Initiative was used to build the new town hall, making massive profits for building firm Woodrow Wyatt. They’re talking about selling off the city’s council housing, old people’s homes, the refuse service. The whole council’s for sale. They’re closing down the welfare rights benefit advice service soon. There’s been a number of redundancies and council tax is still going up by 6.5 percent. People were sick of Labour after years of cuts and voted Liberal because they put on a left wing face. But the Liberals are even more right wing than the last Labour council. They end up being exactly like the Tories.”

“PEOPLE WERE sick of their services being cut under the Labour council and there being no proper housing in Islington. The Liberal Democrats are even worse though. Labour made cuts but the Liberals have made more radical cuts, totalling around 4 million last year. They’ve taken 10 off the council tax over the last year but people just think, “What’s the point of that when we get less services?” I used to be the treasurer for the Blackstock Community Advice Centre. They used to help many distressed and ethnic minority people there. It was vital to the local area. The Liberals closed it. They said they wanted three advice centres across the borough. People are still coming to me for advice because they can’t get appointments in these centres. The Liberals have closed the day centre for elderly Greek people in Archway, the Asian Resources Centre, the Irish Resources Centre and the Unity Performing Arts community centre. The private company ITNet still runs the housing benefit system and the service is dreadful. People haven’t had their benefits and some have been threatened with eviction. The Liberals voted to close Angel School. They even tried to close Preedy House old people’s home. Only a judicial review and two residents refusing to leave stopped them.”

“IF YOU said to anyone in Liverpool that the Liberal Democrats are a left wing alternative to New Labour they’d laugh at you. People were so disillusioned by the record of the Labour council that the Liberal Democrats were elected in 1999. Over the last 18 months the attacks on council services and the workforce have been rampant. We’ve lost between 1,500 and 2,000 jobs in the workforce because of the Liberals’ “restructuring”. They’re desperate to keep the council tax level frozen. The only way they can do this is by slashing the budget. There used to be 40 nurseries in Liverpool. Now, after years of cuts, we’re down to ten. The Liberals are closing another two nurseries in Toxteth, a very poor area with a large black population. There will now be no free nurseries in the area. When they controlled the council in the early 1980s they slashed spending by 7.5 million, voted through a rent rise of 34 percent and sacked 4,500 workers. Richard Kemp, a Liberal councillor, said, “Really we ought to be building houses for rich people. What Liverpool needs above all is more wealthy inhabitants. The dominance of council tenants only fosters the ghetto mentality.” This man is still a Liberal Democrat councillor today.” 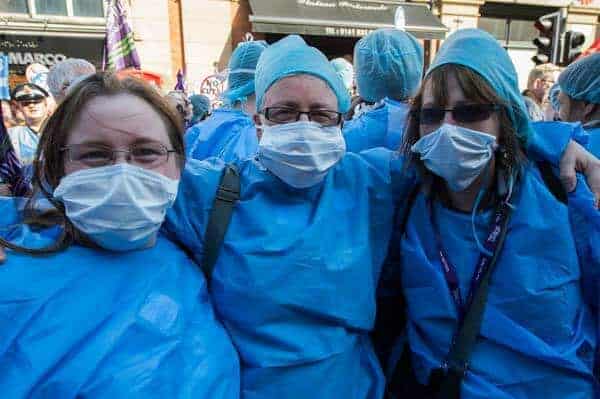