This article is over 13 years, 11 months old
The scare stories about sharia can't hide the fact that \"British justice\" has always been about preserving the rule of the rich, writes Richard Seymour
Downloading PDF. Please wait...
Tuesday 12 February 2008

The newspapers are terrified. Rowan Williams, the archbishop of Canterbury, has raised the suggestion that some forms of sharia law be introduced as a means of ‘constructive accommodation’ with British Muslims.

The Sun raised the prospect of ‘medieval punishments’ being inflicted on Britons, and complained that Williams was ‘giving heart to Muslim terrorists plotting our destruction’.

The Telegraph explained to its readers that sharia is associated with ‘amputation of limbs, death by stoning or lashes’ for such crimes as theft. Perhaps the Telegraph is concerned about its former proprietor, the convicted fraudster Lord Conrad Black. On their account, if he had been tried under sharia law he wouldn’t have a limb left on his body.

However, even liberal opinion is expressing concern, arguing that Muslim women will experience reduced freedom if religious courts are allowed to adjudicate in matters of family life.

There is a further implication that what is proposed is somehow ‘alien’. This is ‘a Christian country with Christian laws’, according to the national director of the right wing pressure group Christian Voice. And Gordon Brown has conceded to this nationalist sentiment, arguing that ‘British law should be based on British values’.

The scare stories have little to do with what is actually proposed. The archbishop called for allowances to be made for the practice of sharia law within the confines of English law, on a limited basis and with the mutual consent of everyone affected.

He argued, quite correctly, that there is a diversity of interpretation among Muslim jurists about what sharia entails, and endorsed the liberal variants. He pointed out that Britain already has separate arrangements for other religious communities. Orthodox Jews are entitled to work out some of their arrangements in a rabbinical court. Muslims can already choose to have disputes settled privately under sharia law. And there are already sharia-compliant products and services operating in Britain, for instance in banking.

So the hysteria is not really about anything Rowan Williams actually said. It is an expression of the Islamophobia that has been cultivated in the West as an obnoxious cultural counterpart to the ‘war on terror’.

Meanwhile, the tabloids are several centuries behind on this scoop – Britain already has a system of alien laws. It is maintained in large part by right wing bigots in outlandish medieval costumes, such as the ‘law lords’ or the ‘privy council’.

Drawn from a ruling class with an alien culture – and values that most of us don’t share – our overseers in wigs and cloaks have always been rather fond of telling us how to live.

They tell us who we can have sex with, and have even been given to legislating on what kind of sex we can have; under what conditions we may be married and to whom, and when we may divorce; what we can protest about, when and for how long; when we can strike, and for what we may strike; what we can consume, and where we can consume it.

Whether outlawing homosexuality, restricting abortion, or regulating the ingestion of recreational substances, these laws have never had anything to do with the values of ordinary people.

For example, at the moment, the state is considering restrictions on a woman’s right to abortion. This campaign is being driven by right wing anti-abortionists such as Ann Widdecombe MP.

The fact that state control of the female body has resulted in the deaths of women in backstreet abortions doesn’t stop these people calling themselves ‘pro-life’ – but they represent a minority of the British people, and certainly a minority of women.

As usual, the trouble with the archbishop of Canterbury is not that he ‘went too far’, but that he didn’t go far enough. He rightly challenges the state’s monopoly on public identity, but does so primarily in order to carve out a larger space for religious power.

One of Rowan Williams’s political interventions in 2007 was to co-author a letter to the prime minister asking that Catholic adoption agencies be exempted from regulation that would compel them to consider gay people as adoptees. To put it another way – he asked the state to guarantee the Catholic church’s right to operate homophobic policies.

In the case of sharia law, on one level Williams isn’t asking the state to withdraw, but to get more involved in the regulation of religious and personal life. He suggests that certain forms of Islam are more acceptable than others – and that those variants ought to be encouraged and recognised by the state.

It is quite right that Muslims should have the same rights that any other religious group has – but the best way to ensure that is for the state to keep out of our moral lives. And a good first move in that direction would be to divest the Church of England of its peculiar privileges and authority.

Richard Seymour’s book The Liberal Defence of Murder will be published by Verso later this year. He runs the Lenin’s Tomb website at » leninology.blogspot.com 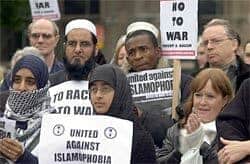