Sean McGovern, the London Remploy branch secretary for the T&G section of the new Unite union, told Socialist Worker, “We want the reversal of the decision to close our factories and give disabled people a choice in work, which they don’t have at the moment.

“A union activist asked Gordon Brown in the meeting if he would support our strike ballot against the closures. Brown just batted the question away.

“The only bit of controversy in the whole meeting was when someone asked the deputy leader candidates what they felt about the disappointing failure of John McDonnell to get on the ballot paper for leader of the Labour Party,” he said.

Around 60 people demonstrated outside the hustings in Cardiff last Saturday, despite finding out the time and venue with less than 48 hours notice.

Stop the War activists and Remploy workers kept up a lively protest for almost two hours.

Around 20 Labour members entering the hustings signed the Stop the War petition, with Glenys Kinnock MEP assuring protesters that she had “already signed it”.

“When Brown finally did arrive we weren’t sure it was him till the reception that had gathered outside the arena began clapping, at which point the entire protest erupted into deafening boos before people remembered their chants!”

For details of this Saturday’s hustings lobby in London see » www.stopwar.org.uk

Building to stop the war 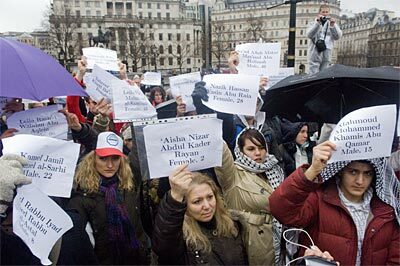