Over 600 people marched in Barton Moss in Eccles, Greater Manchester, to protest against the IGas company’s explorative drilling in the area last Sunday.

Campaigners came from as far as Brighton and South Wales.

They joined activists from the FBU and PCS unions, and Wirral and Cheshire trades councils on the national day of action.

IGas wants to exploit coal bed methane and “frack” for shale gas from beneath disused coal mines. These are now covered in houses and farmland that produces potatoes and salad foods.

They plan to drill through the coal and the shale layers beneath to depths of around 3,000 metres.

IGas and the government are trying to pitch fracking as a solution to future energy shortages. They say it will generate jobs.

Marie Harvey grew up in the area and believes fracking will pollute the water. Her friends in West Virginia in the US have direct experience of living in a fracking area.

She said, “Their son is in hospital with burns from showering in water the company said was clear—but it wasn’t. We can use wind and solar—anything renewable is better than fracking.”

Now David Cameron is trying to bribe anti-fracking campaigns by allowing local councils to keep all of the business rates from fracking companies.

Clara Paillard from the PCS National Green Task Group argued that the number of jobs created by US fracking had been exaggerated. But she said that tackling climate change and creating jobs could go together.

“The TUC’s position is to oppose fracking as long as it’s not safe. But we don’t want it even if it were safe because it will push up CO2 emissions. Fossil fuels are not the future.”

A group of “protectors” have been camping out at Barton Moss since last year.

There has been anger at Greater Manchester Police (GMP), who were accused of assaulting protester Sean O’Donnell at the camp.

Marchers took over the road and chanted “GMP—IGas’ private army”.

One legal observer pointed out that there were no police on the demo on Sunday.  He added, “They don’t mind jumping on protesters when there’s 20 of them at the camp but when there’s hundreds they leave them alone.”

Some 30 people also  atended a Campaign against Climate Change meeting of environmentalists and trade unionists in Eccles the day before to discuss the campaign and what to do next. 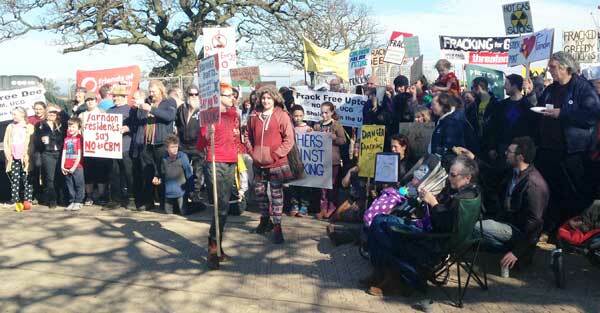